LIKE DOOHICKEY and gizmo, wha’ cha’ m’ call it (also rendered whatchamacallit) is a placeholder, a word referring to things the names of which are irrelevant, unknown or temporarily forgotten. However, as perhaps comes as no surprise to you, I have a book that takes care of this. What’s more, it’s in two languages. 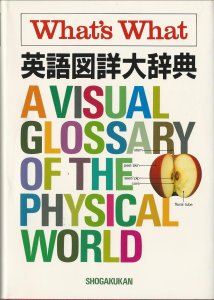 What’s What: A Visual Glossary of the Physical World, edited by Reginald Bragonier, Jr. and David Fisher, Shogakkan, 1985.

My particular edition of Bragonier and Fisher’s What’s What is published in Tokyo, a 946-page English/Japanese compendium of copious illustrations with dual-language tags attached to all the details. Topics are arranged in 14 categories ranging from Personal Items, things like apparel, footwear, timepieces and eyeglasses; to Transportation, everything from automobiles to spacecraft; to Signs and Symbols, heraldry and flags to traffic signage; to The Earth and its planetary system.

For instance (useful knowledge for crossword fans), what’s that little tube at each end of a shoelace? It’s an aglet/アグレット. Also identified are a bunch of other shoe parts, sole, shank, vamp, welt, tongue and throat. (I didn’t know shoes had throats. Did you?) 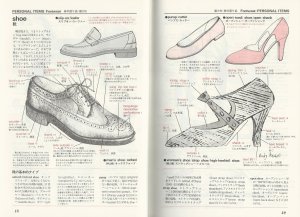 Shoes. This and other images from What’s What.

In the Shelters and Structures chapter, it’s easy to get occupied in the two-page spread devoted to the Tower of London. I now know where patriots were when “o’er the ramparts we watched.” Also, the item corrected my misunderstanding about loopholes. I used to think they were passages permitting counterattacks. In fact, they’re slits in castle walls designed for archers. 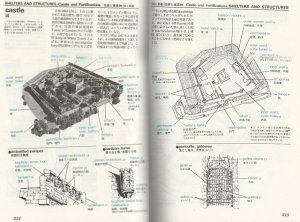 The Tower of London.

The chapter on Signs and Symbols has religious symbols, signs of the zodiac and familiar road signage. There’s also a page of proofreader’s marks, a few of which I believe I’ve used. My favorite page in this chapter is the collection of hobo signs, graffiti that tramps and vagrants used to communicate the lay of the land for other wayfaring folk. I especially like the kindhearted lady. 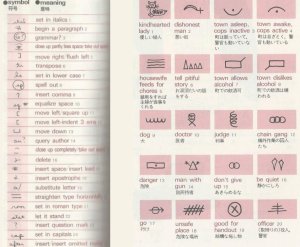 Though the English-only edition of What’s What is the most common one, I’ve seen versions in English/French (Le Qu’Est-Ce Que C’Est), English/Spanish (Qué es Qué) and English/Chinese in addition to my English/Japanese edition.

This has complicated life for some people apparently not fond of a duality of tongues. One reviewer’s complaint about getting stuck with Taiwanese is just the opposite of my delight with What’s What. To me, it’s a pleasure to enhance language skills while at the same time solving the wha’ cha’ m’call it question. ds

This entry was posted on July 31, 2015 by simanaitissays in Uncategorized and tagged "What's What: Visual Glossary of the Physical World" edited by Braagonier and Fisher, castle terminology, English/Japanese, hobo signs, proofreader's marks, shoe terminology.