A MOTHER LODE OF NUGGETS

CALIFORNIA’S FORTY-NINER Gold Rush owes its origin to a construction fault at Colonel John Augustus Sutter’s mill. What’s more, Sutter wasn’t really a colonel. He didn’t actually discover the gold. And he died years later, nowhere near California, waiting for the federal government to honor the discovery. Nuggets of gold galore, and I’ve got the right book for mining them. 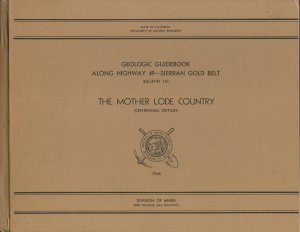 Indeed, California’s gold wasn’t first discovered at Sutter’s Mill in what’s now Coloma, about 130 miles northeast of San Francisco. In late 1841 or early 1842, Francisco Lopez of the Rancho San Fernando, 35 miles northeast of the Pueblo of Los Angeles, was digging up some wild onions for a snack. The earth on his knife showed a glitter that turned out to be particles of an alluvial gold deposit.

Placer gold, it’s called, rhyming with “passer,” not “pacer.” The word is from the Catalan for shoal. Alluvial deposits are washed into gravel of streams and rivers. Our tale moves several years and 400 miles northwest from San Fernando to the Sierra Nevada’s American River. 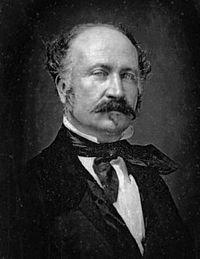 The year was 1848, and Colonel John Augustus Sutter had already established a feudal barony of sorts near present-day Sacramento. As German-Swiss Moravian Johann August Suter, he had fled a Swiss lockup for unpaid debts in 1834, had adventures in the American southwest, Hawaii, Russian settlements in Alaska and Mexico ones in Alta California. Along the way, he had Americanized his name and become a Mexican citizen.

Sutter was having a sawmill built, its power derived from a brief detour, a mill race, of part of the American River. A fellow named James Wilson Marshall supervised the construction, and it was Marshall’s challenge to remedy a design flaw.

Sutter’s sawmill, as it appeared later when abandoned. The image probably dates from 1853; the man in the foreground might be James Marshall. This and other images from The Mother Lode.

Of course, water flows downhill. However, the sawmill’s foundation had been set too low and its tailrace, the water exiting the mill, wasn’t deep enough to drive the waterwheel with sufficient force. Excavation was called for, and on the morning of January 24, 1848, Marshall was inspecting progress on the work.

According to The Mother Lode Country, “Something glittering caught his eye. There, resting in a shallow depth of water, was a yellow flake of what appeared to be metal.” Marshall collected a few more pieces and took them to Sutter for analysis. Gold!

Sutter had hope of keeping the discovery quiet, but that was for naught. He wanted to secure his land ownership, so he sent an associate to Monterey, then the capital of California. However, this fellow boasted about the gold as he passed through Benicia and San Francisco.

On March 15, 1848, less than two months after the discovery, The Californian newspaper published news of the find. The next year, Forty-Niners were transforming San Francisco into a major seaport overwhelming its rival Benicia. (San Francisco’s population soared from 200 in 1846 to 36,000 by 1852.) 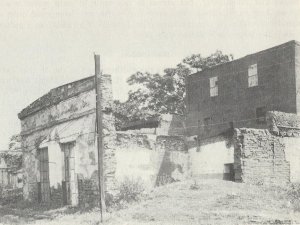 There were thriving communities in the Mother Lode. The ruins of Dominico Ghirardelli’s store in the town of Hornitos, as they appeared in 1948. Yes, that Ghirardelli.

California was already part of the U.S., as a result of the Mexican-American War, 1846 – 1848. But fat lot of good this did Sutter. In 1858, the U.S. Supreme Court denied validity of Sutter’s El Sobrante (leftover) land grant. He was offered only a $250 monthly pension, return of property taxes already paid.

Geologic map of the region. Coloma, California, is near the center, on the American River. Red triangles are placer locations; rectangles are mother lodes (principal veins).

In 1871, Sutter moved from California Gold Country to the town of Lititz, in southeastern Pennsylvania. This was in part for the healing aspects of Lititz Springs, in part for the town’s highly regarded Moravian schools for his grandchildren, and in part for its relative proximity to Washington, D.C.

Sutter continued his appeal to the U.S. Congress for restitution. On June 16, 1880, Congress adjourned yet again without action on a bill that would have given Sutter $50,000 ($1,165,000 in today’s dollar). Two days later, Colonel John Augustus Sutter died in Washington, D.C. He is buried in the Moravian Cemetery in Lititz. ds