WONDERFUL ART comes about when famous artists are cajoled into theater costume and set design. I’ve offered examples of this, with Pablo Picasso’s contribution to Le Tricorne, Fernand Leger’s work for La Creation du Monde and David Hockney’s for The Rake’s Progress. Here, let’s celebrate Parade, Picasso’s 1916 collaboration with writer Jean Cocteau, composer Eric Satie and ballet impresario Sergei Diaghilev, about as outlandish an arts quartet as can be imagined.

An excellent source on this (and a bibliophile’s delight) is Douglas Cooper’s book Picasso Theatre. Cooper notes that Parade made its debut during the worst of World War I. Man-about-town Jean Cocteau was splitting his time between Paris nightlife and ambulance driving at the front.

Jean Cocteau, 1889 – 1963, French writer, designer, filmmaker. This and other images from Picasso Theatre by Picasso.

Cocteau conceived the ballet as a Parisian boulevard depiction of a Chinese conjuror, an acrobat and a little American girl, each with dark overtones. (There were hints that the conjuror was capable of torturing missionaries; the acrobat communed occultly with the stars; the little girl could have perished on the Titanic.)

To produce the ballet, Cocteau had in mind Russian impresario Sergei Diaghilev of the Ballets Russe. Writes Cooper about Cocteau’s choice, “Was not Diaghilev ‘perpetually seeking some new, some surprising revelation’ from him and urging Cocteau to ‘amaze’ him?” 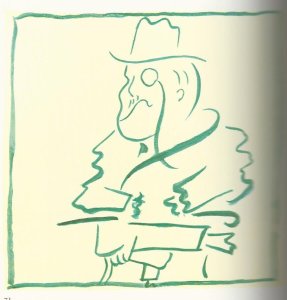 For its music, Cocteau chose Erik Satie, in a sense the Philip Glass of the era. Satie’s music was lyrical yet light, its avant-garde settings combined with humor. Examples: “Three Pieces in the Shape of a Pear,” “Flabby Preludes (for a Dog)” and “Teasing Sketches of a Fat Fellow Made of Wood.” Parade was Satie’s first ballet.

Eric Satie, 1866 – 1925, French composer and pianist, precursor of minimalism and the Theatre of the Absurd.

In approaching Pablo Picasso about designing Parade costumes and scenery, Cocteau sensed he had a hard sell. He wrote, “The idea of painting a décor, especially for the Russian Ballet… was no less than a crime. Worse still, we would have to join Serge de Diaghilew [sic] in Rome, and the Cubist code forbade any journey other than the one on the Nord-Sud from the Place des Abbesses to the Boulevard Raspial.” (This Paris Métro trip took all of 24 minutes.)

In this, his first ballet assignment, Picasso did more than agree; he enthusiastically suggested changes. In lieu of Cocteau’s occultism, Picasso saw what Cooper calls “a typical boulevard spectacle… witty, satirical and brash.” 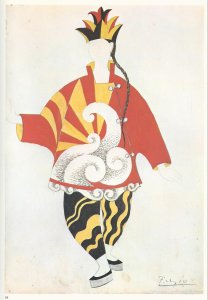 Chinese Conjuror costume in Parade, this and other costumes by Picasso.

Parade was choreographed and danced by Diaghilev protégé Léonide Massine, who readily accepted Picasso’s artistic input. Some of the costumes had Cubist touches, though others were out-and-out radical, to the point of allowing the dancers only minimal movement. 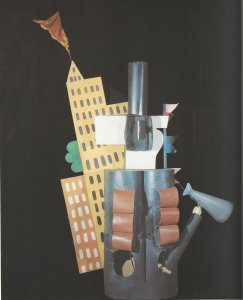 The New York Manager costume in Parade. Note the megaphone; imagine dancing in such a costume.

Theatrical Managers, for instance, were dressed in Cubist cardboard, one with monocle and walking stick, another carrying a megaphone through which he mock-shouted direction. Cooper notes that these characters represented the business spirit, dancers “who gestured and stamped around during periods of silence between musical numbers.”

Parade, the curtain, tempera by Picasso.

The May 18, 1917, Paris debut of Parade caused an uproar, at least in part because of its Cubism. As early as 1912, the French Chambre des Députés had termed the genre “anti-artistic and anti-national.” It was spelled le Kubisme with Germanic implication, so Parade audience catcalls of “Sales Boches!” (loosely, “Dirty Krauts”) were not unexpected. 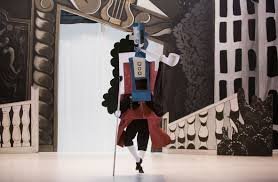 Parade, a video by Europa Danse.

On the other hand, the program writeup by French poet, playwright and art critic Guillaume Apollinaire proved prophetic: “Parade will upset the ideas of a fair number of spectators. They will certainly be surprised, though in the most agreeable way, but as its charm works they will gradually discover that modern movements have a grace which they had never suspected.”

This entry was posted on May 27, 2015 by simanaitissays in And Furthermore... and tagged "Picasso Theatre" by Douglas Cooper, Eric Satie, Europa Danse, Jean Cocteau, Pablo Picasso, Parade ballet, Sergei Diaghilev.