THE FAME of Walt Disney’s Mickey Mouse gave a name to one of the world’s most charming automobiles, the Fiat 500 Topolino (Italian: Little Mouse, and Mickey’s nickname there).

The diminutive car was the product of a Fiat design contest won by an employee destined to motorsports fame. The Topolino put Italy on four wheels, was portrayed in its art, played politics with fascism, co-starred in a Hollywood romance with Audrey Hepburn, and continues as an object of affection among car collectors.

In 1933, Fiat Chairman Senator Giovanni Agnelli invited designers from all divisions of the company to contribute ideas for an economy car capable of carrying two people and their luggage. Dante Giacosa, 29 at the time, and colleagues in Fiat’s aeronautical group were selected to engineer the car’s mechanicals. Giacosa went on to design the Cisitalias made famous by race driver Tazio Nuvolari. Chief stylist Rudolfo Schaffer came up with streamlined coachwork for the Topolino’s tidy packaging.

In contrast to the Grand Marques, the Fiat Topolino was a modest car indeed. Its overall length of 127 in. fits between the wheelbase of a 2015 Cadillac Escalade ESV. Its engine was a side-valve 13-hp four-cylinder displacing 569 cc, about the same as one cylinder of the V-6 powering today’s Honda Accord. 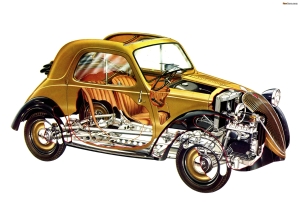 The engine perched ahead of the car’s front axle, with its radiator residing behind it. This layout permitted the Topolino’s steeply sloping nose and aerodynamic demeanor.

The Topolino’s chassis was drilled for lightness. With the first 46,000 chassis, a live rear axle was suspended on quarter-elliptic springs. However, Topolino owners were carrying four people in their due posti machines, and Fiat responded with stronger semi-elliptic springs on an extended chassis. 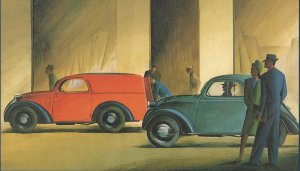 Over its 19 years, there were Topolino Coupés, Transformabiles (convertibles), Giardinettas (station wagons) and (Furgonchinos) utility vans. Image by Guglielmo Rossi.

The 500C, appearing at 1949 Geneva, swapped the Topolino’s original sloping nose for a more conventional (and less attractive) shape with enclosed headlights. Its mechanicals were substantially upgraded, though the 500C’s performance and fuel economy were no better than those of the 500B.

From the beginning and the car’s endearment with Mickey Mouse’s Italian name, the Topolino brimmed with personality and brio. Its advertising messages and cultural influences reflected this.

Music for Fox-One Step song, by Rolando and Valabrega, “In my Topolino.”

The Topolino couldn’t help but appear in any movie set in Italy during the period. A high point was starring in Roman Holiday (1953)

, a romance of a bored and sheltered princess who briefly pals around with American ex-pats and falls in love with one of them. Audrey Hepburn is the errant princess. Newsman Gregory Peck is the love interest and his photographer colleague Eddie Albert is the Topolino pilot. 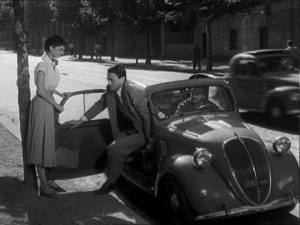 Gregory Peck (6 ft. 3 in.) maneuvers out of Eddie Albert’s Topolino 500B as Audrey Hepburn watches. Image from http://toldbydesign.com/, where there’s also a video of the scene listed under “I’ll park at the corner.”

Those of us of a certain age were utterly captivated by Audrey Hepburn. And the auto enthusiasts among us coveted Eddie Albert’s wheels too. ds