ARTS AND CRAFTS IN CALIFORNIA

ARTS AND CRAFTS didn’t originate in California, but the movement reached a local high in that state at the beginning of the 20th century. The residential architecture and furnishings of Greene & Greene, the totality of Riverside’s Mission Inn and the preservation dedication of Charles Fletcher Lummis are key elements of California’s Arts and Crafts.

In 1974, the Pasadena Center hosted an exhibition celebrating California Design 1910. A fifteenth anniversary edition of its catalog put California’s role in Arts and Crafts Movement in perspective.

Arts and Crafts evolved in England in the last decades of the 19th century, largely as an intellectual reaction to the impersonal nature of industrial society. As noted in California Design 1910, it grew from precepts of William Morris and “endeavored to reunite the individual with nature and the satisfaction of productive work.”

In reaching California, though, its influence was decidedly different: “The creative expressions and lifestyles of the Californians naturally took on a more optimistic and exuberant tone, closer to the original ideals than had been possible in England or the East.”

California’s version of the movement reflected the westward travel of the nation and “the buoyant enthusiasm of the new frontier.” Here are several of my Arts and Crafts favorites in California.

A selection of Craftsman homes in Pasadena’s Arroyo Seco. This and other images from California Design 1910.

In describing the dry river bed splitting Pasadena, Theodore Roosevelt said, “The Arroyo would make one of the greatest parks in the world.”

Pasadena’s Arroyo Seco is rather more citified today, with the Rose Bowl to the north, Pasadena Freeway on its south and an artful collection of Craftsman residences in between. Sharing Arts and Crafts handiwork, Craftsman style can echo English Tudor, Cotswold, Swiss Chalet, Bavarian Hunting Lodge, the styles of East Coast Shingle, West Coast Mission or Far East Oriental. 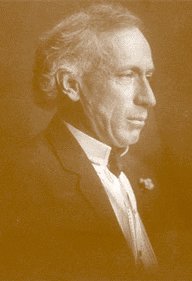 Charles Lummis studied, wrote about and participated in the Arroyo culture.  Today, the Lummis Day Festival, typically held in northeast Los Angeles in early June, celebrates the area’s heritage. See www.lummisday.org. Lummis built his stone residence, El Alisal, on the west bank of the Arroyo between 1896 and 1910. Its furnishings are Mission style. 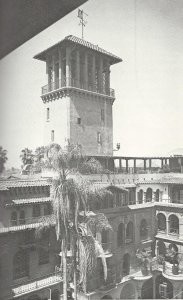 Fifty-five miles east of Los Angeles, Riverside’s Mission Inn began as a small guest house in 1876. Its evolution into a heritage landmark hotel took place over three decades, 1902 – 1932. Original furnishings for the expanded hotel came from Gustave Stickley and other eastern firms. Before long, though, local craftsmen and artisans contributed their skills. 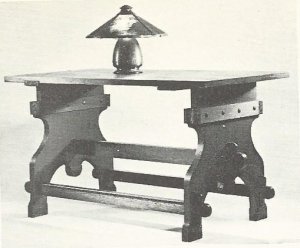 Notes California Design 1910, this library table from the Mission Inn is “presumed to have been built there. With its oversized keys and rakish curves, it is almost a caricature of the sedate designs Gustave Stickley was producing in the east.”

Today, Mission Inn is one of the Historic Hotels of America, part of the National Trust for Historic Preservation. (It also has a great Sunday Champagne Brunch. For this and other details, see www.missioninn.com.)

Charles and Henry Greene came from Brighton, Ohio, near Cincinnati. The brothers followed their parents to Pasadena where they established the architectural firm of Greene and Greene in 1894.

Gamble House was designed in 1908 for David and Mary Gamble (of Procter & Gamble fame). It is a stunning example of Craftsman design, one of what the brothers termed their “ultimate bungalows.”

Following Arts and Crafts fundamentals, the Greenes furnished their residences with their own designs, even to light fixtures, furniture and textiles. 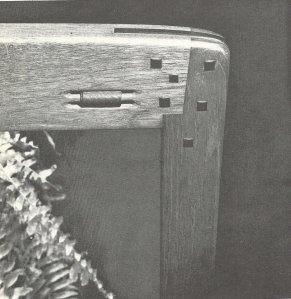 Today, the Gamble House and the Blacker House are included in the U.S. National Register of Historic Places. Gamble House is Pasadena-owned and operated by the University of Southern California; Blacker House is a private residence. The houses and their furnishings are tributes to the wonderful age of California’s Arts and Crafts. ds

3 comments on “ARTS AND CRAFTS IN CALIFORNIA”