IN FRANCE, ITALY AND GERMANY

EUROPEAN TRAVEL at the beginning of the twentieth century wasn’t nearly as straightforward as it is today. There was no European Union and, of course, no euro. Borders mattered. Frenchmen were different from Italians; Germans were different from the rest.

As if the EU is one homogeneous family of nations today…. 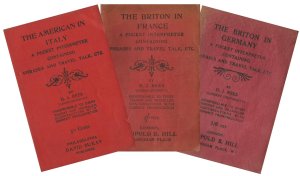 At left, The American in Italy: Being a Pocket Interpreter and Guide to Italy and its Language, Containing Travel Talk and Idiomatic Expressions, with Correct Pronunciation, Italian Grammar at a Glance, 1910; middle,

, each by D.J. Rees (London University).

These guidebooks are great fun to read today. They give a lot of still useful information on getting around in their respective countries. Written by the same evidently talented linguist, D.J. Rees (London University), the guidebooks offer insights into the three countries—and differing perceptions of them on the part of the author.

This is apparent as early as page 4 of the French guide in a unique Personal Remark: “The French people pride themselves on their politeness and nothing so offends them as a lack of the same qualities in others…. With regard to dress, it is necessary to remember that French taste is frequently outraged by travelers entering churches or attending the theatre or opera in tennis clothes or deer-stalking attire.”

The French guidebook is also unique among the three in citing a downside: “On visiting France always take your own piece of soap.”

The Bill of Fare/La Carte du jour/La Carta del giorni/Die Speise-karte. This and other images appear in all three guidebooks.

Italy gets the best Meals summary: “Visitors to Italy will find the cooking usually very good, and meals can always be obtained at very reasonable prices. English people should avoid asking for beef-steaks or roast-beef, as these delicacies are of very inferior quality.”

Dinner/Diner/Pranzo/Das Mittagessen. I like the ambience displayed, but don’t believe him about the roast beef.

On eating in Germany: “The meals in Germany usually consist of an early plain breakfast, Frühstuck; consisting of coffee and rolls; an early dinner at midday, Mittagessen; and a late dinner or supper at around 7, Abendessen…. Beer is the great drink of the people and is exceedingly cheap. English beer may be obtained, but is dear.”

And likely not warm.

The Railway/Le Chemin de fer/La Ferrovia/Die Eisenbahn. In those days, people dressed when they traveled.

The Travel Talk portions of the guidebooks translate identical English phrases. Their accompanying pronunciations confirm why some Englishmen seem to speak all languages with an English accent.

For the scholarly type, each book has a Grammar at a Glance, which does an excellent job of straightening out genders, plurals, adjectives, verbs and that lot.

Last, for the off chance that one finds oneself at a loss for words, each guidebook ends with a list of Interjections. These include Helas! (Alas!), Per bacco! (Good heavens!) and Gottlob! (God be praised!).

That should just about cover it. ds

4 comments on “IN FRANCE, ITALY AND GERMANY”