SIMON JEFFES may not be a familiar composer, however his music has been danced by the Royal Ballet at the Royal Opera House at Covent Garden. There’s a BBC Concert Orchestra CD of his pieces. He had a hand in arranging a Sex Pistols hit for Sid Vicious. And, at the posh Sporting Club, Monaco, supercar designer Gordon Murray chose one of Jeffe’s works to orchestrate the world debut of the McLaren F1, the Formula One company’s first exotic for the street (http://wp.me/p2ETap-1Lr).

Simon Jeffes trained as a classical guitarist, then tried rock for a while. In the early 1970s, his music evolved into what he termed “modern semi-acoustic chamber music” with the Penguin Café Orchestra. “It is café music,” he wrote, “but café in the sense of a place where people’s spirits communicate and mingle, a place where music is played that often touches the heart of the listener.”

Music From the Penguin Cafe

One of my favorite pieces is “Air à Danser,” which can be viewed at http://goo.gl/8pZnaV. Jeffes’ joy in playing the guitar is evident.

The PCO’s music is minimalist, part folk-ethnic, part jazz; think Philip Glass with smiles. Cellist Helen Liebmann was the PCO co-founder and a regular. Others included jazz trombonist Annie Whitehead and Geoffrey Richardson, who played everything from viola to bongos to penny whistle and shared composition roles with Jeffes.

Another favorite is “Prelude and Yodel.” There’s the PCO version at http://goo.gl/xEQEqL and a full orchestration to be cited anon.

The PCO at the time of its Concert Program,

Inspirations for PCO came from around the world—and from every sort of circumstance. For instance, “Telephone and Rubber Band” arose from crossed telephone lines that gave Jeffes both a British ringing tone and busy signal. And, yes, a rubber band is one of the PCO instruments. Another, “Music for a Found Harmonium,” was inspired by a discarded harmonium (pump organ) in a Kyoto, Japan, back street.

Africa was a rich source of PCO themes, including “Cutting Branches for a Temporary Shelter.” It can be heard at http://goo.gl/TggznZ. 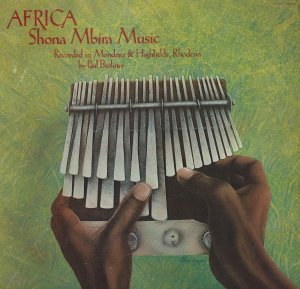 An original of this instrumental, Nhemamusasa, is on Shona Mbira Music, Nunesuch Records, 1977.

The mbira, also known as the African finger piano, consists of a tuned set of metal strips resonating against a gourd. The PCO version adds a pianica, a sort of harmonica with keys.

Another piece inspired by Africa is “White Mischief,” one of the PCO pieces chosen by David Bintley, resident choreographer of the Royal Ballet, for Still Life at the Penguin Café, a wonderful ballet. See http://goo.gl/kHjAql. 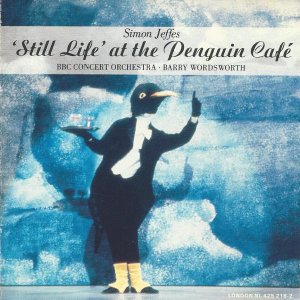 Still Life at the Penguin Café

There’s a video of the entire ballet at http://goo.gl/adlzyd.The PCO small-ensemble versions transform readily into full orchestrations, and even non-balletomanes can be charmed. “Air à Danser” and “Prelude and Yodel,” my two favorites, are initial pieces in the video. The bug in “Pythagoras’ Trousers” (at about 13:30) is a hoot.

Simon Jeffes left a joyous musical legacy; he died of a brain tumor in 1997.

Also, PCO regulars have occasionally coalesced. One quintet formed in 2009 went by the name The Anteaters (a PCO inside joke arising from a Japanese tour). In 2011, the group changed its name to The Orchestra That Fell To Earth. One of its videos (http://goo.gl/HKA2xm) offers a cover of PCO’s “Giles Farnaby’s Dream,” which, in turn, Jeffes based on an English folk song c. 1600. Another, “Tropic of Cancer,” is a new composition very much in the Simon Jeffes spirit (http://goo.gl/raRSla).

These musicians are clearly enjoying their music. I believe Jeffes approves. ds