THIS WEEKEND, October 4 – 5, 2014, is the Japanese Grand Prix, held as it has been, on and off for years, at Suzuka Circuit in central Japan. I have great memories of the place, Japanese Formula 1 fans and my birthday celebrations.

Conveniently enough, for many years Japan scheduled its biannual Tokyo Motor Show to mesh nicely with the FIA-dictated dates of the Japanese Grand Prix. These were often in mid-October, near my birthday. (No gifts, please.)

For several years I celebrated my birthday in Japan with my own special bottle of Scotch at a wonderful bistro near the circuit. Another year, I received a special card and tasty confection from the Imperial Hotel in Tokyo (http://wp.me/p2ETap-11v). Yet another year, my birthday was truncated by the International Date Line.

But enough of my birthdays. What of Suzuka Circuit?

Suzuka Circuit is in Suzuka City, Mie Prefecture, about 240 miles west-southwest of Tokyo, 40 miles southwest of Nagoya. The facility is operated by Mobilityland Corporation, a subsidiary of Honda. Designed by race-track specialist John Hugenholtz in 1962, it’s one of only a few circuits with a figure-8 underpass layout.

Scheduled late in the F1 season, the Japanese Grand Prix often has real excitement. In 1989, the Suzuka chicane was where teammates Alain Prost and Ayrton Senna tangled. See http://wp.me/p2ETap-1mU for details. A year later, the pair put each other out at the first corner. In 1994, torrential rain led to a red flag, a two-stint format, and Damon Hill given a “corrected-time” win over Michael Schumacher.

The katakana reads “ka-vu,” as in “curve.

Things are rarely boring at Suzuka.

There is a Suzuka Circuit Hotel, but invariably it’s filled with FIA biggies. Regular folks stay at businessmen’s hotels in Suzuka or in nearby Yokkaichi.

One year, as a regular folk in Yokkaichi I was awakened at an unholy hour by what sounded like amplified Formula 1 cars. It turned out to be local young bloods revving their two-stroke motorbikes through a train station underpass. Showing social consciousness on their multiple runs, the riders made this racket with their emergency blinkers on.

All in good fun.

Around the corner from the hotel was a congenial place listed in my T&E reports as simply “local bar.” One year, its owner introduced me to a birthday toast of shōchū, a Japanese sweet-potato whisky. The next year, I returned the favor with a bottle of Johnny Walker Black. He promptly wrote my name on the label in katakana, デニス,and the bottle joined a shelf of other potables. He said he’d offer it to anyone else celebrating a birthday. A nice thought.

During the late 1980s, the Japanese people were particularly whacko about F1. It was the Senna era and I believe Ayrton Senna’s cerebral approach to racing struck a chord (see http://wp.me/p2ETap-pF). Such was the Japanese Grand Prix’s popularity that there had to be an annual national lottery—just for the opportunity to buy tickets. 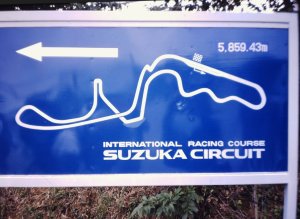 Suzuka Circuit holds 155,000 fans and spectator traffic can be even worse than Silverstone’s legendary snarl. However, there were tricks to be employed. One was to tuck in behind cars bearing FIA stickers, which police directed into the middle of the road to pass everyone else. The funny thing was that no one very important came by car. The really big deals stayed at the circuit hotel; others were helicoptered in and out.

In the late 1980s, I drove a Honda with an early navigation system, one that was accelerometer-based, not yet GPS. Wonder of wonders, it gave me a route away from the circuit on which I was utterly by myself.

In retrospect, it was likely an access path for a local rice farmer. Many thanks, I say. ds

This entry was posted on October 3, 2014 by simanaitissays in Classic Bits and tagged Japanese Grand Prix at Suzuka Circuit, two-strokes in train station underpass, Yokkaichi.