WHEN I say “family-style,” I’m not just talking about food “like mom used to make.” I mean classic eating establishments where everyone is served communal meals at shared tables. It’s heartening to sup at such places, especially when they bring history to the experience of community dining.

Three places of this sort, at diametric ends of the U.S., stand out in my memory. There’s Mrs. Wilkes Boarding House in Savannah, Georgia; Samoa Cookhouse in Eureka, California; and Durgin-Park in Boston, Massachusetts. I delight in memories of each.

One charm of Mrs. Wilkes’ restaurant is its genuine boarding house origins. In fact, it now offers a pied-a-terre with backdoor access to the dining room. (A great way to jump the line at lunch.)

The tables are communal. The menu is family-style: fried chicken, sausage, beef stew and meat loaf always offered, with a veggie array that changes from day to day to include whatever’s in season.

I’ve written about its cookbook (http://wp.me/p2ETap-2oy). Mrs. Wilkes, rest her soul, wrote of “the satisfaction of seeing people from every walk of life sit down and enjoy my “Family Style” meals.” I remember fondly how she’d ask patrons to join hands for a brief prayer of thanks before the meal.

Every logging operation in the northern California redwoods had a cookhouse offering hearty fare. The Samoa Cookhouse has been doing this since 1890. It gets its name from local Samoans who worked on this peninsula of Humboldt Bay.

Today, the Samoa Cookhouse has an adjacent Logging Museum with tools, artifacts, photos and stories. It’s said the loggers’ horses recognized the “quitting” whistle and would refuse to work until fed their oats in the cookhouse barn. Loggers were served three hot meals a day, except for Sunday evenings’ cold plate of leftovers and cold cuts.

The Samoa Cookhouse offers all-you-can-eat meals for breakfast, lunch and dinner in a communal setting. In the heyday of loggers, no one dared sit in Big Joe’s place at the table; these days, it’s less likely to provoke a fight. 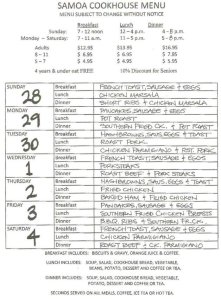 This menu is fresh off the internet. Lunch today, October 2, is fried chicken; dinner is baked ham, plus leftovers (just like home).

Though it’s more than 100 years old, the Samoa Cookhouse is a relative newcomer in communal dining. Across the country in Boston, there’s a place that’s been in business since the 1700s.

The first restaurant at this historic location near Faneuil Hall dates from 1742; John Durgin and Eldridge Park bought the place in 1827. Legend is that fishermen would bring in their catch, give it to the cook and sit down to the freshest of fish dinners. Much of the original atmosphere is still there, though I daresay Durgin-Park has changed more since my first visits in the 1960s than it had between 1827 and then.

Seating continues to be communal, though reservations can now ensure an entire party sitting together. Fifty years ago, when we’d go east to Boston from Worcester Poly, part of the fun was meeting whomever was neighborly at its long tables.

In those days, the waitresses at Durgin-Park could be outspoken: “More bread? You’re not going to waste it, are you?” Today, their surliness is a continued tradition.

Durgin-Park has always focused on New England specialities, with baked scrod a favorite of mine. Scrod can be young cod, haddock, pollock or other white-fleshed seafish, split and filleted. There are plenty of stories about how scrod got its name (small cod remaining on deck), but I won’t vouch for their veracity.

There is a great joke about the visitor who said to a local cabby, “Take me someplace where I can get scrod,” and the cabby responded, “I’ve been driving this hack for years, but you’re the first guy to use the plu perfect subjunctive.” ds