ONE COULD say that all of Ettore Bugatti’s automobiles are works of art, but here I’m thinking about the models, miniatures and sculpted versions of this famous marque. Over the years I’ve seen several, acquired one and am on the lookout for another.

Visitors to the Mullin Automotive Museum can admire many Bugattis, and the first at the entrance to this Oxnard, California, collection is a full-size example in bronze. It’s the work of Francois Chevalier, French motorsportsman and artist. Chevalier has raced at Le Mans and is former manager of the Paul Ricard circuit in the south of France.

W Williams drove his Type 35 to victory in the first Monaco Grand Prix, 1929.

The driver of the bronze, “W Williams,” was a racing pseudonym for Englishman William Grover-Williams (adopted to keep his racing career secret from his family). His victories in Bugattis include the French Grand Prix in 1928 and 1929 and the inaugural Monaco Grand Prix in 1929. Grover-Williams served in the British Special Operations Executive during World War II and died at the Sachsenhausen concentration camp in 1943.

One of the Chevalier Bugatti bronzes honoring W Williams resides along the Monaco circuit, at the bottom of the hill at Ste. Devote. (It’s crated away to safety during race activities). This other is at the Mullin (http://wp.me/p2ETap-1Zb).

German artist and sculptor Martin Heukeshoven specializes in technically fascinating works using found art. Like others of his cars, trucks and aircraft, his Bugatti Type 57 Stelvio (named after a fabled Alpine pass) would qualify in full size as a barn find.

This fender of Heukeshoven’s Stelvio might have once been a coffee can.

Viewed up close, the model displays discarded objects, electronic bits and mechanical odds and ends pre-weathered and artfully crafted into his theme. Heukeshoven constructs two or three models a year. Each is coveted and priced at more than $30,000. For details, see http://www.martin-heukeshoven.de.

Bugatti Brescia, by Bruce Wheeler. His rendition of a Type 35 is seen behind it.

The 1910 Type 13 Brescia was the first real Bugatti automobile. Other Brescia variations, Types 15, 17, 22 and 23, all shared the Type 13’s minimalist engineering and elegant nature. This Brescia by Arizona artist Bruce Wheeler, rendered in copper, brass, rubber and wood, shows the litheness of a Bugatti voiturette, especially noteworthy in that era of 10-liter race cars.

Bruce Wheeler is a member of the Automotive Fine Arts Society, a group of 30 world-class artists and sculptors from around the world. His works are regularly shown at venues such as the Pebble Beach Concours d’Elegance. Bruce can be reached at roadechoes@aol.com.

I acquired my 1927 Bugatti along the shores of Lago d’Orta, one of my favorite northern Italian lakes (http://wp.me/p2ETap-IH). In fact, this bit of folk art comes from the same shop as two of my motorcycle collection (http://wp.me/p2ETap-1as). What the model lacks in technicality it more than counters with whimsy.

The Spanish toymaker Hermanos Paya has been making toys since 1906, with transportation being a prominent theme. Many of its cars, motorcycles, boats and railway machinery have wind-up movements. (Its Santa Fe locomotive is particularly fetching.)

The Bugat is a lithographed tintype, its fabrication of tinplate and details painted by chromolithography. Though the toy is Type-35-esque in its rendering, a close look at its horseshoe-shape radiator shows less than the full Bugatti name. 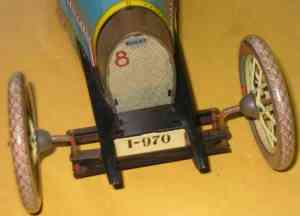 When is a Bugatti not a Bugatti? When it’s a Paya Bugat.

Paya’s tintypes rivaled their German and French competitors, with 2000 different toys offered between 1906 and 1940. In 1985, Paya resumed toy production using the original tooling, dies and molds (an idea exploited later in the full-size auto business as “continuation vehicles”). Currently, 50 Paya toys have been reissued, including the Bugat.