Which, of course, is quite a different thing. 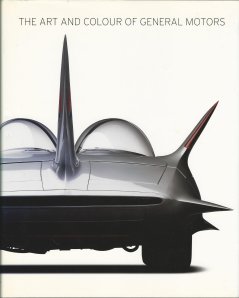 The Art and Colour of General Motors

edited by Jonathan A. Stein, introduction and forward by Bob Lutz and Nicola Bulgari, photography by Michael Furman, Coachbuilt Press, 2008.

The Art and Colour of General Motors celebrates 100 years of the company and its cars. It’s also a social history, with commentaries by automotive authorities such as Jonathan A. Stein, Ken Gross, Richard S. Adatto and Stewart Reed.

This tome is 9 3/4 x 12 1/4 in., 320 pages and weighs 5 lb. It’s arranged historically, interspersed with separate chapters on Chevrolet Corvette and Camaro and another on color and its effects on automotive styling. The studio photography by Michael Furman is artful, and the historical photos are well chosen to place the cars in their era.

The 1937 Cadillac V-16 Series 90 Aerodynamic Coupe. This and other images from The Art and Colour of General Motors.

Writes Stewart Reed, now Chairman of Transportation Design at Art Center College of Design, “The design progression from Cadillac’s original V-16 models to the Aero Coupe is striking. Both cars have the same imposing V-16 proportions with a long hood and rearward cabin. The 1937 has a near coupe-like silhouette and a unified body form with smooth surface transitions and very sophisticated, carefully scaled trim.”

GM sent its dream cars on the road in its Caravan/Parade of Progress in the 1930s and Transportation Unlimited/Motorama beginning in the 1940s. Motoramas evolved into more than car shows, with costumes, orchestration, staging and lighting akin to Broadway standards.

The 1959 Firebird III turbine car was one of the last concepts on the Motorama trail.

Another theme addressed in the book is the tailfin era, a celebration of the Lockheed P-38 Lightning fighter aircraft’s twin booms landing in anyone’s carport.

On the 1948 Cadillac, Reed observes, “The P-38-inspired tail fins are relatively small but extremely significant, and mark the first use of a tailfin on an automobile.” Other automakers around the world were to follow. Within 10 years, fins evolved from subtle elements of style to exuberant exhibitions of opulence. 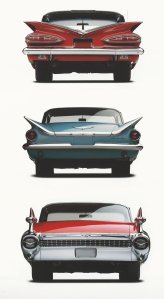 The chapter on automotive colors cites technicalities as important aspects. (The Ford Model T was “any color as long as it’s black” because this paint dried quickly enough for the production line. In fact, the car was available in different hues prior to the 1914 introduction of the production line and its last years, 1926-1927, by which time suitable paints were developed.)

Subtle two-tones during the Art Deco period became bold in the anything-goes 1950s. (Three-tones were not unknown.)

“Give your fancy free rein!” promised Oldsmobile in its 1955 lineup, “to keep you far ahead in the style parade.”

For the past few decades, monochromic themes have prevailed. One of GM’s unifying styling trends, Cadillac’s Art and Science Design Strategy, has been a favorite of mine.

Maybe you have a favorite? ds

This entry was posted on September 22, 2014 by simanaitissays in And Furthermore..., Classic Bits and tagged GM Motorama, Jonathan A. Stein, Michael Furman, Stewart Reed, tail fins, The Art and Colours of General Motors.