IN 2007, Dennita Sewell of the Phoenix Art Museum curated an exhibition titled “Curves of Steel,” featuring 22 automobiles of world-class stature.

As part of the exhibition, the Phoenix Art Museum published Curves of Steel: Streamlined Automobile Design

The exhibition’s catalog is a handsome book of coffee-table proportions. (I wonder. Do people still have coffee tables in their living rooms? We have an art table and an antique drafting table, but we might not be the norm.)

The book is printed on heavy stock, with many historical photos and museum shots of the subject cars by Michael Furman. It’s edited by Jonathan A. Stein, with commentaries contributed by other automotive authorities, including Beverly Rae Kimes, Ken Gross and Richard Adatto & Diana Meredith.

Back in 2007, the museum invited me to deliver a docent tour of “Curves of Steel.” Here are tidbits gleaned from my notes. 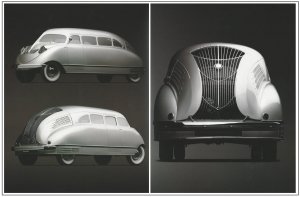 The 1936 Stout Scarab. These and other images from Curves of Steel.

William Bushnell Stout is best remembered as designer of the Ford Tri-Motor and its latter-day Bushmaster 2000 (http://wp.me/p2ETap-15l). When he turned his engineering wizardy to road-going craft, Stout incorporated several state-of-the-1930s-art aviation features into the Scarab.

The car had an all-aluminum skin wrapped around an aluminum tubular framework. Its passengers lounged in reclining aircraft-like seating in a cabin that was huge for the car’s overall length of 195.5 in. (For reference, a modern Honda Accord is 191.4 in. long.)

Power came from a rear-mounted 85-hp Ford V-8 driving the wheels through a six-row chain transfer case. For a video of a Scarab in action, see http://goo.gl/2ePxBw. I also recommend Stout’s autobiography, So away I went!

Stout’s autobiography gives inside details of  his aircraft and cars, including the Scarab.

Rolls-Royce/Bentley’s Paris headquarters oversaw Embiricos’ commission. Georges Paulin, who had already designed the sleek Peugeot Darl’mat, got the assignment of turning a Bentley’s rectilinear shape into something capable of high-speed touring through Europe.

Paulin succeeded admirably, as described in Richard Adatto’s From Passion to Perfection: The Story of French Streamlined Styling 1930-1939

. Later, during the Nazi occupation of France, Paulin’s alternate profession of dentistry got him involved in allied espionage. He perished in Gestapo hands in 1942. See http://wp.me/p2ETap-Pd for details of Paulin’s multi-faceted career.

Paulin’s aerodynamical styling skills and the car’s capabilities were proven by the Embiricos’ record at Le Mans. The car competed three years in a row, 1949 – 1951, more than a decade after it was built, a 6th overall in 1949 its best finish. Talk about legs. 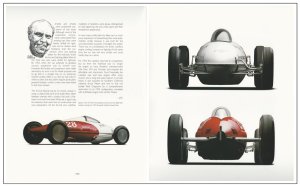 Fitted with increasingly large engines, the So-Cal Speed Shop Team racer set records of 145.395 mph, 181.085 mph and 195.770 mph at Bonneville National Speed Trials in 1951. A generic term “lakester” came from this and other dry-lake venues. For an evocative look at the era, see Hot Rods and Custom Cars—Los Angeles and the Dry Lakes, by Ken Gross and Robert Ames (http://wp.me/p2ETap-1Kr).

What a wonderfully varied celebration of speed displayed by the Phoenix Art Museum in its “Curves of Steel.” ds

3 comments on “CURVES OF STEEL”