HINDUSTAN MOTORS Ltd has shut down production of the Ambassador, as reported in a series of BBC News reports, August 27, 2014. It’s an event celebrated in India with mixed emotions. 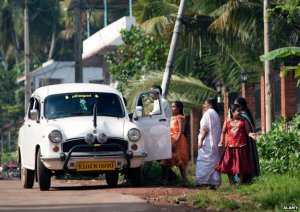 For 57 years, the Hindustan Ambassador has been the automotive status symbol of India. This and other images from BBC News (http://goo.gl/8cBIIU).

The 1957 Ambassador, the first car built in India, used tooling of the 1954 British Morris Oxford. Even after the Indian government allowed automotive imports in the early 1990s, the Amby continued in production for more than 50 years with only a few modifications and upgrades.

However, Hindustan Motors Ltd finally sensed the questionable business model of 2500 workers producing only five cars a day, and indifferently at that. 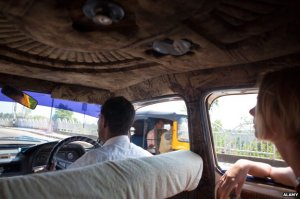 The Amby’s ample headroom and air cabin are appreciated.

The Amby is notorious for its heavy steering, clunky shifter and brakes not up to that 50-percent increase in power. However, its traditional shape and tall greenhouse make it a roomy six-passenger sedan with commodious boot (trunk, to us Yanks). 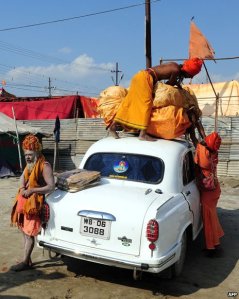 And if the boot is already filled….

The majority of India’s taxis are Ambassadors. Back in the late 1950s, Ambys used by government officials were uniformly white; army generals rode around in black ones. 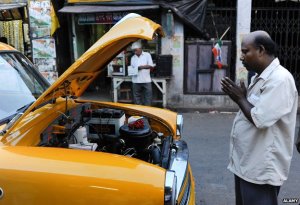 The Amby’s place in modern India’s culture is analogous to the Ford Model T’s in America. Everyone has a story (as recounted in the BBC News items). 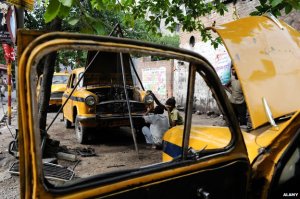 The Amby’s mechanicals are straightforward to repair. A good thing too.

One driver recalls a long trip in which the Amby’s rock-hard ride kept knocking the glovebox door open. He solved the problem by taking the key out of the ignition and locking the pesky door—the Amby’s engine running the whole time!

Multitudes of drivers remember the efficacy of a handy rag soaked in cool water. The Amby’s fuel pump is located directly above the engine’s exhaust manifold, and it vapor-locks at the slightest provocation. Wrapping the pump momentarily in the wet rag gets things working again. 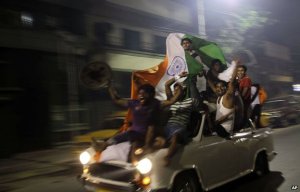 India celebrated its cricket victory over Pakistan in Amby manner.

Amby jokes proliferate: “What’s the only thing on an Amby that doesn’t make noise?” “The horn.”

There’s a wonderful Peugeot ad that celebrates a young man’s fancy and inventiveness with his Amby (http://goo.gl/pT6TW). 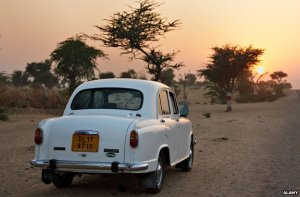 The roads of India will never be the same. ds

This entry was posted on August 28, 2014 by simanaitissays in Classic Bits, Driving it Today and tagged Hindustan Ambassador.