BEING AT the top of the food web carries real ecological responsibilities. And I’m not talking about you or me. I’m talking about certain members of the order Carnivra, the meat eaters.

By contrast, some of our own Primate order are herbivores: The Gorilla, like that apocryphal Panda, eats shoots and leaves. Other primates are omnivores: Some of us even eat anchovy pepperoni jalapeño pizza.

And, indeed, the particular carnivores I have in mind are described in “Status and Ecological Effects of the World’s Largest Carnivores,” an article in Science, publication of the American Association for the Advancement of Science, January 10, 2014. An abstract, structured abstract and editor’s summary are available to non-AAAS members at http://goo.gl/DTJko1.

Another way to arrange these carnivores is shown below. 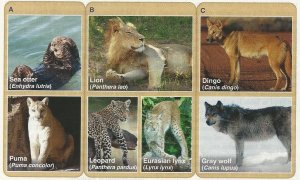 These keystone species have varied means of affecting the ecology. Image from Science, January 10, 2014.

The African lion now occupies only 17 percent of its historical range. It’s listed as vulnerable by the International Union for Conservation of Nature and Natural Resources. At least part of the lion’s decline is in response to protecting humans and livestock.

However, this also leads to an ecological quandary. Baboons are lion prey, and a decreased lion population causes an increase in baboon abundance and territory. This is problematic in that omnivorous baboons compete with humans for food. The Science report notes that baboon raids in some agricultural areas cause children to be kept from school so they can help guard crops.

The gray wolf is one of the world’s most widely distributed and widely studied mammals. Over the years, its range has been reduced by one-third because of habitat fragmentation and being hunted.

A gray wolf at the UK Wolf Conservancy Trust, www.ukwct.org.uk.

Wolves, however, play a crucial ecological role in balancing the number of species lower in their food web. Without this predation, these populations of deer and other species overrun areas and invariably face starvation.

As a tri-trophic/mesopredator species, the wolf affects its environment in many ways. Image from Science, January 10, 2014.]

The report notes that, in recent decades, wolf population declines have been arrested through enhanced legal protection, reintroduction programs and natural recolonization.

The sea otter was hunted to near-extinction during the Pacific maritime fur trade of the 18th and 19th Centuries. See http://wp.me/p2ETap-VI. More recently, it has recovered along the U.S., Canadian and Russian seacoasts, thus offering a case study of this predator’s keystone function in its food web. 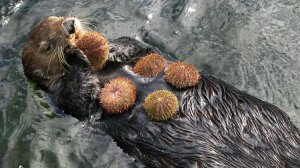 A sea otter has a buffet of sea urchins. Image from the Vancouver Aquarium, www.vanaqua.org.

One of the sea otter’s favorite meals is sea urchin. And sea urchins, in turn, munch away at kelp roots on the ocean floor. Their roots eaten away, the kelp are dispersed to the detriment of coastal ecosystems.

As sea otter populations change, there can be abrupt shifts between kelp-dominated and urchin-dominated conditions.

In summary, the researchers offer a strong argument that conservation of carnivores at the top of the food web is essential for the health of their respective ecosystems. They suggest a two-pronged approach. First, there’s a need for increased understanding of the interplay among species. Second, there’s a moral obligation, a recognition of the intrinsic value of all species. ds