FRENCH CARS have always been quirky fun, and Panhards are among the quirkiest. The Panhard Dyna X, introduced in post-World-War II, bristled with innovative features. It spawned a passel of successful racing cars, including the super-sleek Deutsch-Bonnets and Monopoles—and even went racing itself.

Panhard et Levassor, dating from 1887, was one of the world’s earliest automakers. Renamed simply Panhard after WWII, the company is now part of Auverland building military vehicles.

Genesis of the Panhard Dyna X came during the middle 1940s, its designer Jean-Albert Grégoire sensing the need for a small automobile of high efficiency in Europe’s post-WWII environment. A shortage of steel—and, ironically, a glut of aluminum—gave the Dyna X one of its innovative features, an aluminum body. (See http://wp.me/p2ETap-6B for a similar tale of the British Dellow.)

The Dyna X had front-wheel drive, a favored layout of Grégoire. Power came from a diminutive light-alloy air-cooled two-cylinder engine in boxer configuration, its displacement growing over the years from 610 to 851 cc.

With a boxer layout, the pistons moved inward and outward like a fighter testing his gloves. This opposed-twin configuration gave the Panhard its characteristic exhaust note, more motorcycle than automobile. Alignment of the two cylinders also generated a slight imbalance that caused the entire car to quiver ever so gently in operation.

A parts schematic of the Dyna X’s opposed twin. The elements identified in red are torsion-bar valve springs.

Each cylinder had a hemispherical head with overhead valves actuated by pushrods and rocker arms. Valve closure was achieved by springs, but of a most unconventional sort—torsion bars. (This concept, by the way, reappeared on Honda cb450 and cb500t and later Ducati motorcycles.)

The Dyna X was small, with a wheelbase of 83.9 in. and curb weight not exceeding 1356 lb. Body styles included a four-door saloon, three-door wagon and two-door cabriolet.

The Dyna X was advertised as a comfortable four-place car.

In fact, such was the roominess of the Dyna X that the company published photos showing a total of six (evidently svelte) Frenchwomen aboard. 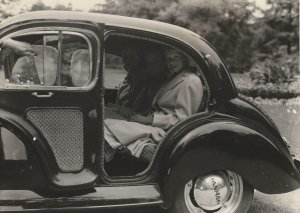 The Dyna X: “As spacious in back as in front.” Image in my collection from Services Photographique, French Embassy Information Division.

Saved from an R&T dustbin is one of these images, to which an office wit had attached a suggested caption: “Come into this cool dark place and we three Frenchwomen will teach you things you never dreamt possible.”

Specialists also built race cars based on Dyna mechanicals, among them Pierre Hémard and Jean de Montrémy with their Monopoles as well as Charles Deutsch and René Bonnet with their DBs and derivatives. Typically, these cars were lightweight, streamlined and efficient.

The Monopoles and DBs took Index of Performance honors at the Le Mans 24 Hours race, 1950 through 1954. The index formula was not completely immune to jiggering by the host Automobile Club de l’Ouest to ensure a French winner. Whatever their other attributes, these cars were bog-slow compared with the fastest of the era.

The CD 3 is seen briefly in action at the Goodwood Festival of Speed; video in my collection.

Panhard-powered cars may not have been quick, but the charm of their quirkiness overwhelms any shortcomings. ds

This entry was posted on February 15, 2014 by simanaitissays in Classic Bits and tagged Deutsch-Bonnet, Monopole, Panhard Dyna X.