AVIATION BUFFS may connect a fellow named Allan Loughead with an aircraft company named Lockheed. But I wonder how many recognize one of his aviation achievements, the svelte 1938 Alcor C-6-1 Jr. Transport? 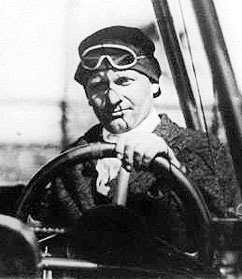 Allan and his brother Malcolm added power to one of Professor John J. Montgomery’s gliders (the earliest of which had flown at Otay Mesa, California, in 1884, a U.S. first). Their craft flew in Chicago in 1910. They continued to dabble in aviation, particularly as builders and operators of exhibition and sightseeing aircraft at fairs and similar venues.

In 1916, the brothers organized Loughead Aircraft Manufacturing Company in Santa Barbara, California. However, when Allan tried to get a World War I Navy contract for their F-1 flying boat, the Navy said it bought only approved designs.

By the time this process was completed, the war had ended. What’s worse, a glut of surplus aircraft put paid to Loughead Aircraft, and the company disappeared in 1921.

The brothers had a sightseeing coup, however. In 1919, Belgium’s King Albert and Queen Elizabeth took the Loughead Santa Cruz Island flight and later presented Allan and Malcolm with the Belgium Order of the Golden Crown.

About this time, Malcolm perfected the idea of hydraulic brakes for automobiles, formed the Lockheed Hydraulic Brake Company and officially changed his surname to match. Chrysler installed the brakes in 1924. Malcolm sold the business to Bendix in 1932.

The brothers, together with aviation pioneer Jack Northrup and a consortium of investors, set up Lockheed Aircraft in 1927. Allan split his time between the aircraft company and a thriving Southern California real estate business (“not particularly interesting,” he said later, “but from a financial standpoint very successful”). 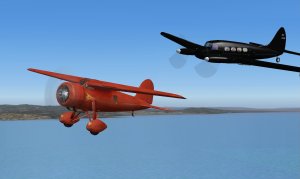 In the foreground, the Lockheed Vega as flown by Amelia Earhart; in the background, the Alcor C-6-1. Image from my Microsoft Flight Simulator.

Lockheed’s first effort, the Vega monoplane, was also successful. It gained fame in a flight across the Arctic; it was flown by the likes of Amelia Earhart, Wiley Post and Jimmy Doolittle; and it set a number of distance, speed and endurance records.

However, in the summer of 1929 one of the Lockheed investors forced a sellout to a holding company called Detroit Aircraft Corporation. Allan resigned and cashed out for $23/share. In the October 1929 stock market crash, Detroit Aircraft plunged to 12.5¢/share.

The Lockheed portion was bought out of receivership in 1932. Allan returned from time to time as a consultant, but never played any further management role. In 1934, he followed his brother Malcolm in officially changing his surname to Lockheed.

In 1937, Allan formed the Alcor Aircraft Corporation in San Francisco.

Its sole prototype was the 1938 Alcor C-6-1 Jr. Transport, a low-wing light transport with innovative motor alignment and composite construction; the latter, shared with the earlier Vega.

The  flight deck of the Alcor’s semi-monocoque fuselage was of steel tubing covered with alloy sheet. Its main cabin, configurable for four or six passengers, was fabricated from two-ply moldings with longerons and formers of spruce. Spruce was also used for control surfaces as well as outer wing surfaces.

The Alcor’s twin engines were mounted horizontally; this, to reduce frontal area and air resistance. These 250-hp supercharged inline-six Menascos had their cylinder heads aligned inward. The twin props angled outward at 4 degrees and cleared each other by a mere 12 in. 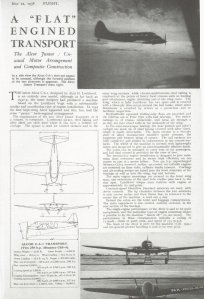 The magazine Flight, May 12, 1938, reported that the aircraft offered particularly good single-engine performance, even to “hands-off” flying on single power.

The arrangement certainly gave the Alcor a distinctive appearance. 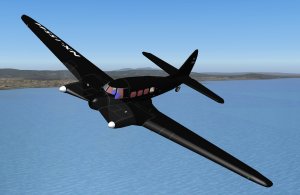 What a handsome craft from any angle. Image of my Alcor C-6-1 model in Microsoft Flight Simulator.

Sad to report, the Alcor had a control failure during testing over San Francisco Bay. Its pilot and passenger bailed out and the aircraft descended in slow circles until it crashed and sank.

After the war, Allan returned to his career in Southern California real estate. He briefly returned to Lockheed as a consultant, primarily to help in “Of Men and Stars,” a company history published in 1957.

Once, when asked what he did in the early days of aviation, Allan said, “I survived!” ds