HOCKNEY ART: STAGE AND i

BRITISH ARTIST David Hockney, age 76, has never shied away from new media. In the early 1980s, he formed scenic montages, each Polaroid snapshot not quite merging with the next. Later, he experimented with computer generated images. He has also made drawings specifically to be faxed.

One of his subjects is the theater, as shown in the book, Hockney Paints the Stage. A more recent endeavor has been his iArt, images originating on iPhone and iPad. These are uniformly delights.

In 1983, the Walker Art Center, Minneapolis, Minnesota, set an international exhibition of Hockney’s work for the stage. Included were costumes and scenery for productions of The Rake’s Progress by Igor Stravinsky, Mozart’s The Magic Flute as performed by Glyndebourne Festival Opera and the Metropolitan Opera’s triple bill of Satie’s Parade, Poulenc’s Les Marmelles de Tirésias and Ravel’s L’Enfant et les Sortilèges as well as a Stravinsky triple of Le Sacre du Printemps, Le Rossignol and Oedipus Rex.

An Assembly study for the Rake’s Progress, 1975, colored inks, cut and pasted paper on paper. Collection of The Museum of Modern Art, New York. Image from Hockney Paints the Stage.

When offered the Glyndebourne assignment in 1974, Hockney felt a lack of theatrical experience. But he brought interesting insight to the project: Adopt the style of William Hogarth’s 18th-century engravings, which the Rake’s director John Cox immediately recognized as being the visual analog of Stravinsky’s edgy precise harmonies. 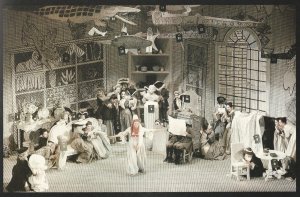 This Hogarth precision coincided with a transition of Hockney’s style, from a free spontaneity to a more measured approach. It made for a perfect match. 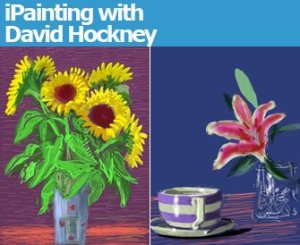 The beauty of his native Yorkshire sunrises gave Hockney his inspiration for iPhone and iPad art. One morning, he experimented using the “Brushes” app on his iPhone to finger-paint a Yorkshire dawn. Later he moved to the larger palette of an iPad.

Hockney and his iPhone pallete. Image from The Evening Standard.

Hockney cites the ease of matching colors and the speed with which an image progresses. He also likes the lack of mess compared with that of traditional media (though he admits he still finds himself wiping his thumb on his clothes as if wiping off paint). Hockney admits modestly, “You need to know a little bit about drawing.” See http://goo.gl/SPZBDf for a video.

His iArt has now been the subject of gallery shows in Paris, San Francisco and other venues. As part of the new media, some of the works are displayed on digital screens. Others are shown as ink-jet prints, including six huge panels displaying a Yosemite vista. 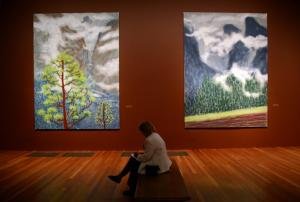 Yosemite scenes composed on iPad are then ink-jet printed on 12-ft panels. Image by Karl Mondon from www.mercurynews.com.

“We hear you started drawing on your telephone.”

“Well, no,” says Hockney, “actually it’s just that occasionally I speak on my sketch pad.” ds

This entry was posted on January 18, 2014 by simanaitissays in And Furthermore... and tagged David Hockney, Hockney Paints the Stage, iPhone and iPad art.