FOR TODAY’S debate on the future of fuel-cell propulsion, we are fortunate to have two eloquent spokesmen—with quite opposite views.

Providing a fuel cell update is Satoshi Ogiso, Managing Officer of Toyota Motor Corporation. See http://goo.gl/PYu57R for a presentation he made in Ypsilanti, Michigan, on August 28, 2013, as part of the 2013 Toyota Hybrid World Tour.

Stating a counterargument is Elon Musk, whose Tesla Motors has been a Wall Street wonder for producing the Model S electric vehicle (http://goo.gl/VkqM), not to mention for paying off its government startup loan early. 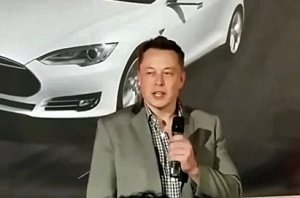 Musk’s comments quoted here come from an address he made on October 24, 2013, at a new Tesla Service Center in Munich, Germany.

Pro fuel cell: Toyota is unveiling its production fuel-cell sedan at the upcoming Tokyo Motor Show next month. The car will go on sale in 2015, with initial global sales predicted at 5000 to 10,000 vehicles. 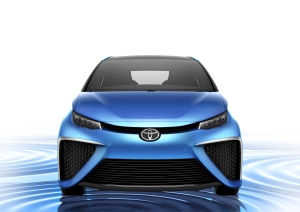 These photos, added here after their early November embargo, show the Toyota FCV in its final “concept” form to be introduced later this month in Tokyo. It’s clear these are extremely close to the production version coming in 2015.

Ogiso believes that fuel cells are on a steeply descending cost curve, dropping by 95 percent in less than a decade. In 2007, when Toyota built about 100 FCHV Highlanders, he observes that the fuel-cell system cost nearly $1 million per car. Today, the systems are more like $100,000 apiece.

More important, Ogiso says that current fuel-cell costs will halve—to about $51,000—by the time 2015 serial production begins. What’s more, costs are expected to halve again between 2015 and 2020.

By 2020, Osigo says the cost of a fuel-cell vehicle “will be closer to that of a plug-in hybrid and cheaper than an electric vehicle.”

Anti fuel cell: When asked about fuel cells at the Munich event, Elon Musk said, “Oh God, a fuel cell is so bullshit. The only reason they do fuel cells, they don’t really believe this, it’s like a marketing thing.

“The reality is that if you took a fuel-cell vehicle—and ‘best case’ of that—it doesn’t even equal the current state of the art in lithium-ion batteries.

“And hydrogen is quite a dangerous gas. It’s suitable for the upper stage of rockets but not for a car.”

Musk also defended a highly publicized Tesla Model S fire by noting the errant object on the road that punctured the car’s battery pack would potentially have done more damage had it been a gasoline car.

Musk implies that a “best case” fuel-cell vehicle is inferior to this lithium-ion Tesla Model S.

Concerning Tesla EV range, a member of the audience cited a Tesla Model S trip to the Munich event of 450 km at an average speed of 100 km/h on a single charge. Musk repeated the numbers—to much applause.

He’s an entertaining spokesman—who must also be a PR person’s headache. See http://goo.gl/jfTiAW for Musk’s complete comments at the Munich event. (His fuel-cell comments are around 29 minutes into the video.)

A personal comment: In full disclosure, I have been enthusiastic about fuel-cell technology for years now. See www.wp.me/p2ETap-3l for my experiences with several of those $1 million Toyota FCHVs back in 2007.

One of my 2007 adventures was driving a Toyota FCHV from Fairbanks, Alaska, to Vancouver, British Columbia, more than 2300 miles.

Even with that 2007 state of the art, I drove from Las Vegas, Nevada, to San Diego, California—436 miles on a single fill of hydrogen. By contrast, the single-charge Tesla trip cited at the Munich event translates into traveling 280 miles averaging 62 mph (not decidedly different from my Las Vegas/San Diego average in 2007).

There are plenty of other issues—cost trends of batteries and fuel cells, infrastructures, recharge/refill times—and customer acceptance.

An alternative transportation model envisions a multiplicity of propulsion options.

The full debate won’t be over any time soon. Indeed, there need not be a unique winner. ds

This entry was posted on October 27, 2013 by simanaitissays in Driving it Tomorrow and tagged Elon Musk, fuel cells vs battery evs, Satoshi Ogiso.