THERE’S A new $100 bill entering circulation—not that it matters much to me directly, as even Grants ($50s) make me nervous. Nevertheless, these new Benjamins are accompanied by lots of neat trivia which prompts me to do more investigation, even to digging out my own (relatively) rare examples of U.S. currency.

The new $100 bill, aka C-Note, was introduced on October 8, 2013, the point being increased security against counterfeiting. Woven into its center—i.e., not printed–the bill has a blue 3D Security Ribbon. Liberty bells and numerals 100 alternate in the ribbon as the bill is tilted back and forth; these images move up and down as it’s tilted from side to side.

Don’t print this at home, kids. The U.S. Federal Reserve are professionals. Obverse above; reverse, below.

There’s an inkwell on Franklin’s left, which has a Liberty Bell that “ages” from copper to green as the bill is tilted. A quill pen and phrases from the Declaration of Independence are imprinted to his left as well.

Over Franklin’s right shoulder (and rad hairdo), there’s a Security Thread that, when held to the light, is seen to be imprinted with the letters USA and the numeral 100. (It doesn’t appear in the image here.)

These and other subtleties are designed to confound—or at least slow down—counterfeiters around the world, especially in North Korea. 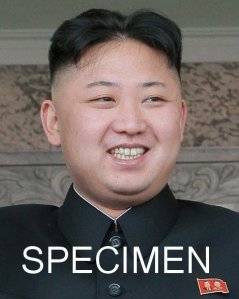 Do not accept Benjamins from this man. Image from the Korea Central News Agency.

Kim Jong-un and his pals allegedly have a regular business of printing their own Benjamins, then distributing them throughout the world via their embassies. A South Korean newspaper, The Chosun Ilbo, reports that one North Korean embassy in Eastern Europe generates $30 million U.S. each year by passing counterfeit notes.

According to the Federal Reserve, perhaps $900 billion worth of real Benjamins are in circulation, more than two-thirds of them outside the U.S. No pun intended, but major users include Azerbaijan, Indonesia, North Korea, Russia and Vietnam.

The Benjamin is the second most common (you’ll excuse the word) U.S. bill. Only Washinton’s $1 is more circulated. The estimated life span of a C-Note is 15 years. The Ten-Spot has the shortest life span of just 4.2 years.

All the paper for U.S. currency comes from one source, Crane & Company of Dalton, Massachusetts. Crane has been providing the paper since 1879; the company roots date back to 1776. According to a Crane spokesman, a typical piece of paper will break down after 400 folds. By contrast, a U.S. bill is design to withstand 8000 folds.

My (relatively) rare U.S. currency? A Jefferson, a $2 bill. Indeed, I have a pair of them, both crisp and like-new, though I do not recall whence I came upon them.

A Jefferson, obverse above, reverse below.

The Jefferson was discontinued in 1966, then reintroduced 10 years later as a potential cost-saving measure. It constitutes fewer than one percent of notes currently produced and is rarely seen today. Indeed, try using one at a takeout window.

I recall they were not uncommon during my undergraduate years in Worcester, Massachusetts. One rationale for them was the $2 window in horse race betting.

2 comments on “THE NEW BENJAMINS”