THERE’S MORE than 100 years of history in Tokyo’s Imperial Hotel—indeed, in all three of the hotels occupying this site just south of the Imperial Palace. And all three (http://goo.gl/ctzhf) have ties to Americans, specifically, Admiral Matthew C. Perry, architect Frank Lloyd Wright and other famous personages.

After more than 250 years of Japan’s isolation, Admiral Perry and his “Black Ships” of 1852-1854 led to dissolution of the Tokugawa Shogunate (www.wp.me/p2ETap-GZ). During the subsequent era (1868-1912) of Emperor Meiji, Japan did more than open its commerce, it rapidly absorbed everything it could about the west.

The first Imperial Hotel, opened in 1890, was a perfect example of this Meiji Era. Designed by Japanese architect Yuzuru Watanabe, its neo-renaissance style would not have looked out of place in New York City.

The original Imperial Hotel featured American beds, Irish linen, English silverware and French cuisine. In time, though, its 80 rooms were deemed insufficient, and Frank Lloyd Wright was commissioned to design and build a replacement. 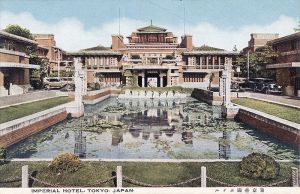 Aware of Japan’s earthquakes, Wright “floated” the entire structure atop its alluvial soil. Efficacy of the concept was shown on the day of the hotel’s official opening. On September 1, 1923, the Great Kanto Earthquake struck the Tokyo region, its 7.9 force unsurpassed in Japan until the Tohoku 9.0 disaster of 2011.

The Great Kanto Earthquake of 1923 destroyed much of Tokyo, but not Frank Lloyd Wright’s Imperial, at left.

Among famous guests of this Imperial were Babe Ruth, Helen Keller, Bob Hope and Cary Grant. The hotel came through other earthquakes and even World War II relatively unscathed. Indeed, it was the headquarters of the U.S. Occupation Forces from war’s end until 1952.

Others enjoying Imperial hospitality included Marilyn Monroe and her husband Joe DiMaggio, visiting on their honeymoon in 1954.

No, not the Beatles, but Joe DiMaggio and wife (aka Marilyn Monroe). Image from Imperial Hotel.

It was at an Imperial Hotel press conference that Monroe, when asked what she wore to bed, replied now famously, “Chanel No. 5.”

A decade later, during the 1964 Tokyo Olympics, the Imperial served as the headquarters for the International Olympic Committee. What’s more, one of its chefs was in charge of catering the Olympic Village.

The Wright Imperial Hotel has its own Lego kit. (See http://goo.gl/lmMyI.)

Eventually, not unlike other innovative Wright structures, the Imperial suffered from incremental degradation. Also, by the late 1960s, its 250 rooms were no longer considered optimal use of prime Tokyo real estate. 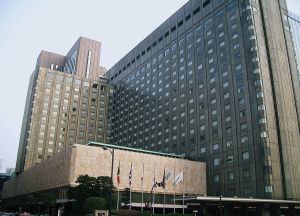 The third—and current—Imperial has a main building opened in 1970; an Imperial Tower followed in 1983. This luxurious hotel is one of the two Imperials I’ve had the pleasure of visiting.

The other is at Meiji-Mura (Meiji Village), an outdoor architectural theme park about 20 miles north of Nagoya, in central Japan. When the Wright Imperial was making way for the new one, its Main Entrance Hall, Lobby and associated bits were cataloged, brought to Meiji-Mura and reassembled.

The Wright Imperial’s Main Entrance Hall is one of 67 relocated Japanese structures that comprise Meiji-Mura (http://goo.gl/Nyb0U).

A virtual visit to Meiji-Mura is easy through the wonders of Google Maps. You’ll find the Imperial at the north end of the property. To its southeast is the impressive St. Francis Xavier’s Cathedral, neo-Gothic, built in 1890 Kyoto. Toward Meiji-Mura’s southern boundary is St. John’s Church, 1907 Kyoto, a bit of Japanese whimsy in Romanesque/Gothic design.

Meanwhile, back in Tokyo, on the Mezzanine Floor…. Image from Imperial Hotel.

The Imperial in Tokyo has the Old Imperial bar with furnishings and decor of Frank Lloyd Wright ambience. I’ve enjoyed a wonderful single malt scotch whisky or two there. ds