IT WAS 14 years after founding Avions Voisin in 1905 that the highly talented—and even more highly eccentric—Gabriel Voisin turned from aeroplanes (www.wp.me/p2ETap-B3) to automobiles. And what automobiles!
Gabriel Voisin’s cars are rolling examples of Cubism, Art Deco, Dada and other art trends sweeping Europe in the 1920s and 1930s. They’re over-the-moon, yet elegant.

At first glance, the 1928 Voisin C11 Lumineuse looks like a Bentley of the era, though with odd features. Its front fender struts echo Voisin’s aero heritage. The running-board storage is ungainly, yet it optimizes interior room.

Bizarre fabric design is characteristic of Voisins. The expansive window treatment gives the car its name, Lumineuse, suggesting an abundance of light.

Not surprisingly, Voisins were popular with the art community of Paris. Photographer Man Ray drove one. Le Corbusier did as well.

Le Corbusier and his Lumineuse.

In 1925 this architect and urban planner proposed a Plan Voisin, supported by the automaker, replacing central Paris with an array of cruciform 60-story towers—the same out-of-the-box thinking that characterized Voisin’s cars.

The C11 was the first Voisin with 6-cylinder power; earlier ones were inline-4s. Most Voisins continued with these inline-6 powerplants. All were sleeve-valve engines produced under license from Knight.

Instead of conventional poppet valves opening and closing, sleeve valves slide up and down around the piston, slots in the sleeves defining the cylinder porting. Shortcomings of sealing and high oil consumption were disadvantages; quietness and, in the days of frequent “decoking” of conventional valves, sleeve-valve durability were benefits. 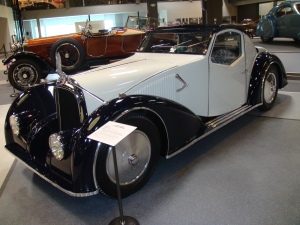 The 1934 C27 Aérosport, as it appears at the Mullin Automotive Museum, along with a Lumineuse and other Voisins. A special Mullin exhibition, La Vision de Voisin, runs through April 2013.

What looks like a tiny sunroof doubles for (really tiny) rear vision.

The hardtop of the C27 slides rear- and downward on rails, its actuation powered by engine vacuum. Offering only a modicum of rear vision once retracted, the roof incorporates a small glass insert, a mini sunroof when the roof is closed.

The 1935 C28 Aérosport Coupé is my favorite. Its headlights nestle nicely between the fenders and Voisin grillework. Its pontoon fender line is tautly continued from front to rear.

Like other Voisins, the C28 Aérosport Coupé has coachwork that’s rich in aluminum.

Similar to the C27’s, the C28 Aérosport has a vacuum-operated roof panel and full-disc wheels. I love its tri-windscreen wipers and rear fender skirts, even with their odd discontinuity—but carefully alignment—of textured trim. 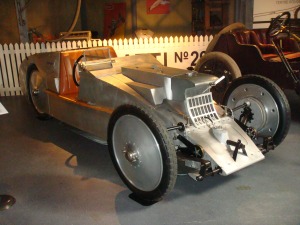 This wonderful recreation of the 1923 Laboratoire also resides in the Mullin Automotive Museum.

The 1923 Laboratoire Grand Prix car embodied many of Voisin’s radical ideas. A monocoque design primarily of flat aluminum panels, the Laboratoire had an extremely narrow rear track that eliminated the need for a differential. A small propeller at the nose drove the engine’s water pump.

The Laboratoire’s cockpit would have seemed cramped by the end of the 1923 French Grand Prix, an event of almost 500 miles.

A team of Laboratoires contested both the French and Italian Grands Prix of 1923. One was fifth (albeit of only five finishers) in the 799-km (497-mile) French event, in a time of 7 hours 50 minutes 29.2 seconds.

Last, late in his career, in a war-ravaged Europe, Gabriel Voisin designed the Biscooter, utterly basic transportation that was built in Spain beginning in 1953 as the Biscuter.

Above, the Voisin Biscooter, shown at the 1949 Paris Auto Show; below, Le Corbusier’s Voiture Minimum of 1936.