PITY THE poor apostrophe. It is getting increasingly misused, abused and even relegated to secondary status among its punctuational brethren. Yet I also appreciate that our English language is a living thing, and maybe we should be graceful about this and just kiss it off. 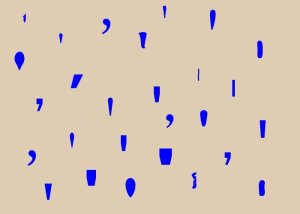 Take a good look. The apostrophe, in whatever shape, may be on its way outta here.

There are three principal uses for the apostrophe in English: to identify a contraction, to identify a possessive, and to ease the legibility of some plurals.

This last one is the least abused: “Mind your P’s and Q’s” is easier on the eye than “Mind your Ps and Qs.”

The other two, contractions and possessives, get garbled, overdone, underdone, ignored and interchanged. The rules, though, are fairly straightforward.

The possessive adds “ ’s ” to the possessor: My aunt’s pen; St. Paul’s Epistle. Again, easy enough, but I’ve seem “my aunts’ pen” when there’s only a single aunt being discussed.

English author Kingsley Amis offered a charming example of this in three variations of a single sentence:

● Those things over there are my husband’s. (They belong to her husband.)

● Those things over there are my husbands’. (She’s been married more than once—or is polyandrous.)

● Those things over there are my husbands. (My favorite, though perhaps she’s being a tad disrespectful to them all.)

And then there’s the misused double possessive: “The Epistle of St. Paul’s.” The “of” would seem sufficient to confirm possession.

On another aspect of all this, there’s widespread confusion about the contraction “it’s” and the possessive “its.” Somehow it bothers me less when the apostrophe is simply ignored in lieu of using it incorrectly. The occasionally “ its’ ” looks plain wrong.

Ignoring the poor apostrophe is being abetted by designers of our gizmos—and God forbid computer whizzes should become arbiters of the English language.

The default keyboard of an iPad lacks an apostrophe, but it exclaims just fine, thanks.

The keyboard of my iPad doesn’t have an apostrophe in its default display, though it does has an exclamation point.

The apostrophe resides one level down, together with an additional exclamation point.

There is an apostrophe in the next level of the keyboard—where “ ! ” is duplicated. What does this tell us about the designers’ usage of the language? The apostrophe gets a similar deal on my iPhone, though it’s easier to rationalize given the keypad’s limited real estate.

[Addendum: See Reply below for a neat iPad feature I never used.]

On the other hand, maybe these designers are just ahead of their time. Up into the 1800s, today’s possessive “its” was written “it’s.” No less than Thomas Jefferson used it in hi’s writing. Maybe its time to loosen up with this English language of ours. ds

This entry was posted on January 18, 2013 by simanaitissays in I Usta be an Editor Y'Know and tagged apostrophe.