NO LESS an authority than Dr. Ferdinand Porsche called Tazio Nuvolari the “greatest driver of the past, the present, and the future.” The diminutive Italian from Mantua—known as Il Mantovano Volante, The Flying Mantuan—mastered his craft and dominated his era. What’s more, throughout his racing career he showed determination in the face of adversity. 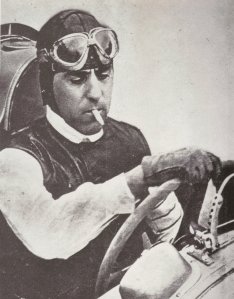 Unlike today’s race car drivers, Nuvolari didn’t begin his competition career until the age of 27—and this, in 1920, racing motorcycles. Soon, he gained a reputation on four as well as two wheels. In 1924, he piloted his 1486-cc Chiribiri Typo Monza race car to finish 2nd in the Circuito del Savio, bested by an Alfa Romeo RL Sport with more than twice his car’s displacement. The driver of the Alfa was Enzo Ferrari.

A fabled Nuvolari drive came at the wheel of an Alfa Romeo 6C 1750 in the 1930 Mille Miglia. After a race-long duel, Nuvolari was comfortably ahead on elapsed time, though still in arrears of Achilles Varzi, a teammate but also his rival. 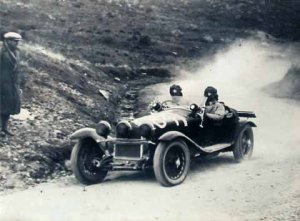 It wasn’t enough that Nuvolari was winning the 1930 Mille Miglia; he needed to reach the finish ahead of his rival Varzi.

It’s said Nuvolari caught him up with the Alfa’s headlights off. Just for the prestige of it, he passed Varzi on approach to the finish.

Such was Nuvolari’s fame that Italian patriot, poet Gabriele d’Annunzio (see http://wp.me/p2ETap-dt) awarded him a golden turtle badge bearing the dedication, “To the fastest man in the world, the slowest animal.” 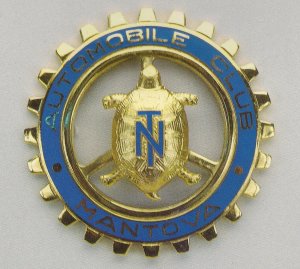 This badge from the Automobile Club Montova has Nuvolari’s emblem as centerpiece.

The keepsake became Nuvolari’s talisman. He carried the turtle with him, had it embroidered on his race tunic, printed on his stationery and, later, painted on the side of his personal aircraft. 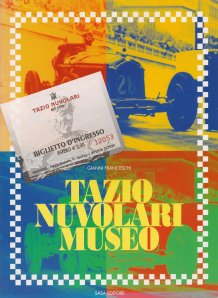 Catalog of the Tazio Nuvolari Museo, circa 1998. Both www.amazon.com and www.abebooks.com list it. Images here come from this catalog. The museum has had a couple of relocations. See its Facebook page, museo-tazio-nuvolari, for the latest information.

His finest race, renowned as “The Impossible Victory,” came at the 1935 German Grand Prix at the Nürburgring. Five Mercedes-Benz W25s and four Auto Union Type Bs were heavily supported by the Third Reich and absolute favorites. Nuvolari drove an outdated Alfa Romeo P3.

At mid race, after a rainy, foggy 11 laps of this mountainous 14.17-mile circuit, Nuvolari was running 2nd. Then a refueling problem set him back to 6th. Amazingly, by the beginning of the last lap, he was back in 2nd behind Manfred von Brauchtisch in one of the Mercedes W25s. Brauchtisch ruined a tire in the harassment and Nuvolari passed him to win.

Nazi officials were stunned. It’s said the organizers took 30 minutes finding a recording of the Italian Anthem for the victory ceremony. Some say Nuvolari himself provided it.

After World War II, his health deteriorating, Nuvolari continued his competitive ways. In the 1946 Coppa Brezzi in Turin, he and his Cisitalia led at the end of the first lap.

Nuvolari’s Cisitalia was not without its problems, but nothing to deter him very much.

On his next pass of the pits, he brandished the steering wheel that had come off in his hands. He completed another lap by man-handling the steering column, then came in to have the wheel replaced.

This newspaper supplement honored The Flying Mantuan shortly after his death.

Late in his career, he was seriously ailing but never undaunted. Tazio Nuvolari died of a fatal stroke—in his bed—in 1953. ds

This entry was posted on January 17, 2013 by simanaitissays in Classic Bits and tagged Il Montovano Volante, Tazio Nuvolari.