MALAMALA GAME Reserve is in northeastern South Africa, its 33,000 acres sharing an unfenced border with this country’s Kruger National Park. Visiting there in 2002, I learned that MalaMala is a spectacular venue for seeing and photographing the African “Big Five,” the Cape Buffalo, Elephant, Leopard, Lion and Rhinoceros. 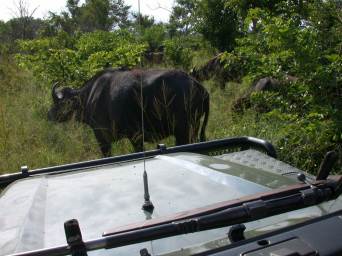 Within minutes of landing at the MalaMala airstrip—after buzzing it to ward off the warthogs!—we were in the midst of 150 Cape Buffalos.

By the first evening, my group riding in open Land Rovers had encountered these Big Five and more. 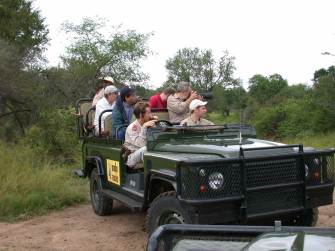 The animals looked on our open Land Rovers as nothing more than big green rocks that moved from place to place.

Even predators such as lions and leopards went about their lives showing complete indifference to us. Our only admonitions from guides were to stay within the vehicle, not wave arms or cameras and, when really close to animals, talk in low voices. Amazing!

My favorite photo: This feline is ready for her close-up.

Not that we didn’t witness drama: When a young leopard wandered into their territory, several lionesses slowly circled the smaller cat. Then, at a gentle trot, not a run, they encouraged the leopard into a nearby copse. There, it climbed a tree, and the lionesses nonchalantly took naps—at the tree’s base.

This leopard chose a tree rather than a confrontation with other felines.

There was abundant game and foraging for all. Potential prey seemed to understand when it was safe to graze even though in sight of predators.

These gazelles were not far from a pride of lions. Though we viewed predators dining on a kill, we never witnessed one directly.

There are dangers, however. We were told that male elephants in musth are always given a wide berth. You know the type: They like to knock trees over, just for the helluva it. Black rhinos can also be aggressive—plus, their eyesight isn’t much.

This white rhino is recognized by his wide (in Dutch: weit) snout. Both black and white rhinos are actually tawny gray.

Curiously, we never did get near monkeys. Apparently they don’t buy into the “big green rock that moves” theory.

Our only heart-skipping encounter came with several elephants choosing the dirt road instead of the bush, often done, we learned, to save energy in transit. A teenager and baby ambled into our path, and Momma decided we were too close to the latter. She faced us squarely, her flapping ears changing from cooling mode to confrontational—and she made four quick steps toward our Land Rover. 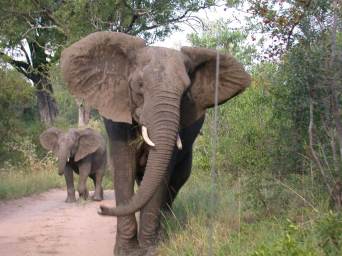 Our guide sensed this coming and already had the Land Rover in reverse. He popped the clutch and dug out backwards.

We reversed about 20 ft. Momma realized the big green rock that moves had just given way. She and her family ambled up the road.

For more information about this magical place, check out www.malamala.com. ds

This entry was posted on November 15, 2012 by simanaitissays in Just Trippin' and tagged MalaMala Game Reserve, South Africa.