WEYBRIDGE, SURREY, is a quiet neighborly locale about an hour southwest of London. It has always been quiet and neighborly, except for around-the-clock shenanigans run at the Brooklands Motor Course. Neighbors complained, and from 1929 organizers split things into two successive days of Brooklands racing—hence the Double Twelve.

These days, the wonderful Brooklands Museum (including what remains of the Motor Course) and adjacent Mercedes-Benz World (a super showroom, of sorts) sponsor a latter-day Double Twelve.  Check out www.brooklandsmuseum.com/index.php?/double12 for information of next year’s event, June 15-16, 2013.

I had the pleasure of competing there in 2008. What follows here is a fond remembrance of that magic.

Cars in the Double Twelve are classified by age and type, everything from Veteran and Edwardian “motors” to those as recent as “my” 1961 Mercedes-Benz 300SL Roadster, borrowed from the company’s Untertürkheim museum.

The 300SL shared paddock space with a Benz 18/45. In the background is the Brooklands clubhouse.

Spectators and participants were encouraged to roam the Brooklands property, where many of its workshops and garages have been restored to their original state.

Good for R. R. Jackson: He even got the Ampersand right.

The Double Twelve venue was an open-air museum-in-motion of fascinating cars from every era. A replica of the 1886 Benz Patent-Motorwagen teuf-teuffed its way around the paddock, while a scream could be heard of a nearby modern F1 car.

Above, Lewis Hamilton demonstrates the controlled fury of a modern McLaren. Below, a Mercedes-Benz W-196 Grand Prix car from the mid-1950s.

The sights, sounds and appropriate automotive aromas were all there.

Those competing for Double Twelve awards had events such as a Steering Test—a five-gate slalom held on a portion of the Members’ Circuit, just where it flattens out from the Banking—and a Quick Start involving both reverse and forward maneuvering between hay bales.

The 300SL goes nose-down as I aim for straddling the finish line of the Quick Start test.

There were also timed regularity laps around Mercedes-Benz World’s twisty test circuit, a complex “Wiggle-Woggle” gymkhana and (except for the Veterans and Edwardians) a run up Brookland’s legendary Test Hill. 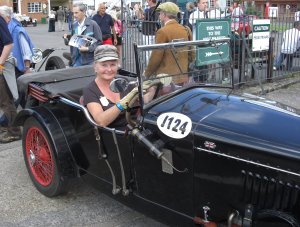 Judy Portman’s Anzani-powered chain-drive Frazer-Nash prepares for the Test Hill. Below, they made it in fine style.

From a level Go, the Test Hill quickly turns into a moderately steep 1-in-8 incline, then 1-in-5 and finally 1-in-4. The 300SL barely recognized it as a hill, but I’m sure glad I didn’t have to climb it on foot.

Much of the original 2 ¾-mile Brooklands circuit is gone now, but the steepest portion of its Members’ Banking is still there.

The Members’ Banking was quite an acheivement of construction in 1907. Below, the same view today.

But for the foliage, here’s what a driver saw coming off the banking. 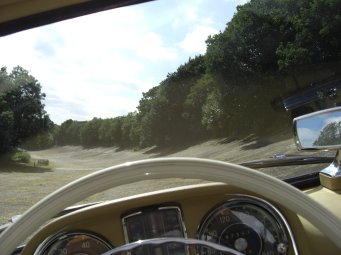 The Brooklands Double Twelve is an automotive Time Machine. I like to think that H.G. Wells would be proud. ds

This entry was posted on November 14, 2012 by simanaitissays in Classic Bits and tagged Brooklands Double Twelve, Mercedes-Benz 300SL.