INTERNAL COMBUSTION engines built before 1900 are celebrated as “centennial engines.” And, among enthusiasts of things mechanical, the Coolspring Power Museum is a real treasure trove of these wonderful devices. 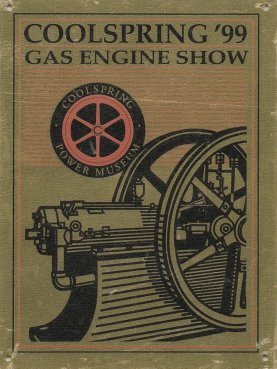 Twice yearly, Coolspring has a special Expo. The “Gas” of this Gas Engine Show in 1999 was hydrogen, chosen for its similarity to “town gas” of the centennial era.

Coolspring is a tiny farming community about 80 miles northeast of Pittsburgh, Pennsylvania, just off Interstate 80.

Punxsutawney Phil may not know it, but he resides only 10 miles from what’s likely to be the world’s largest collection of operating centennial engines.

There’s logic in this location: Unused barns and sheds gave hobbyists John Wilcox and Paul Harvey a place to store—and tinker with—the old engines they collected. One thing led to another, and today Coolspring Power Museum displays 250 engines in 20 buildings, hosts two major shows each year, in June and October, and has been named a Mechanical Engineering Heritage Collection by the American Society of Mechanical Engineers. Visit its website at www.coolspringpowermuseum.org to learn about its (rather limited) open hours, special events and the like.

This artful device, an Otto & Langen atmospheric engine, circa 1867, is on display at the Coolspring Power Museum.

The earliest Otto & Langen was an atmospheric engine, ambient air pressure providing the power stroke. Its cylinder’s combustion chamber received an uncompressed bit of internal combustion; as it cooled, a partial vacuum was generated within. This caused ambient pressure of the air to push its piston upward on the engine’s power stroke. A rack and pinion translated the piston’s motion to the flywheel.

Centennial engines are artful in their construction, often displaying elements of pure design such as the Otto & Langen’s fluted column. Other beauty lies in their exposed hardware offering a perfect lesson in the intricacies of Nikolaus August Otto’s four strokes. 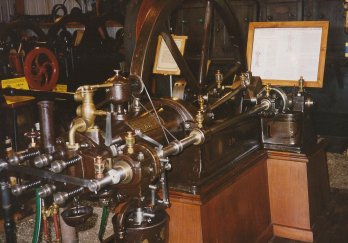 Like many of these stationary engines, this one has a horizontal layout. The cylinder head is closest in view; the single-throw crankshaft and its sizable flywheel are farthest.

More than one scheme was tried to initiate combustion. My favorite is flame ignition, wherein a sliding plate carries flammable gas past a pilot light, then exposes it to a port in the cylinder head. All this occurs with barely audible pops, as compression ratios are modest, barely 3:1, amid much gentle clinking, clanking and whirs.

The elegance of flame ignition: At left, pocket h in sliding plate C receives its charge of flammable gas from port k. The gas is ignited by pilot light l. Simultaneously, cylinder port b gets its fresh gas-air mixture through g and f aligning with pocket e. Then, at right, pocket h and its flaming gas aligns with port b, thus (one hopes) igniting the cylinder’s gas-air mixture.

These stationary centennial engines originally operated on “town gas,” the same stuff used for illumination during the Gaslight Era. In a wonderful blend of the past and the future, Coolspring Power Museum is set up to fuel its centennial engines on the nearest modern equivalent—hydrogen. ds