WE THINK of freeways, expressways, motorways, autobahns, autoroutes and autostradas as ubiquitous. And, in fact, in the U.S., the U.K., Germany, France and Italy, respectively, these high-speed limited-access highways are how we get from place to place. But, of course, it wasn’t always this way.

I came upon an interesting bit of history on the matter in a pamphlet published in 1959—not all that incredibly long ago to me—by The Motor, one of England’s oldest and most respected automotive magazines. It’s called “Motorway, The Motor Guide to Britain’s First Long-distance Express Highway.” 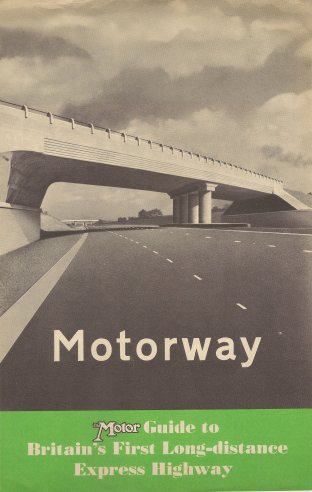 Three lanes of smooth straight highway in each direction; a marked contrast even to A roads in Britain today.

The pamphlet was for the opening of the London-Birmingham Motorway, what’s now the M1. In 1959, leaving London you’d have to travel northwest to Watford or St. Albans before encountering the Motorway. Then you’d pass Luton (whence the Morgan/Anzani-powered Luton L.A. 1 Buzzard sailplane) and a tad north of Bletchley (where Bletchley Park code-breakers cracked the German Enigma code during World War II). On to Newport Pagnell, at the time the home of Aston Martin, and then north of Towcester.

Towcester, by the way, is pronounced “Toaster,” just as my undergraduate school, Worcester Poly is “Wooster,’ or in genuine eastern Massachusetts, “Wostah.” Toaster is just north of the Silverstone Race Circuit which, in turn, is at the center of England’s “Motorsports Valley,” where so many Formula 1 and other race teams and suppliers are located. 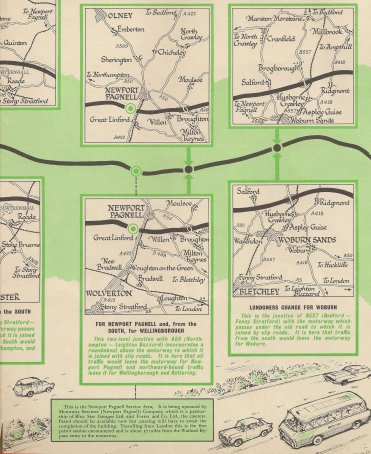 Maps helped motorists find entrances and exits along the way from London’s northwest to the vicinity of Birmingham.

When you got near Rugby, you’d hang a left and finish the journey to Coventry and Birmingham on conventional roads. (This is the M6 now.)

The pamphlet provided by The Motor showed maps for each of the entrance/exits as well as pertinent extracts from The Highway Code. Today’s freeway users would take all these in stride, things like accelerating to merge into traffic and continuing on if you miss your exit.

Other “Motorway Dos and Don’ts” are a bit more quaint—and charming:

“DON’T let your gaze wander to the attractive country through which the motorway passes. This is the first road designed for the efficient use of motor traffic in Britain and is not for sightseers.”

“DON’T forget that one’s senses become attuned to high-speed driving very quickly and you may tend to travel faster than normally when you get back to an ordinary road.”

The original Motorway had no speed limits for most vehicles belonging there. What a novel idea.

“DO bear in mind that a safe cruising speed for the engines of most cars is 20 percent below the top speed recorded in The Motor Road Tests.”

Combining these last two comments brings to mind a mix of cars racing down the Mulsanne Straight at Le Mans. ds

This entry was posted on September 24, 2012 by simanaitissays in Classic Bits, Just Trippin' and tagged English Motorway 1959, London to Birmingham.