THOUGH I wouldn’t call Sherlock Holmes an automotive buff, he has had a non-trivial intersection with car magazines. Here are three examples.

In April 1985, Joe Rusz and I traversed Alpine passes in two Porsches, a 944 Turbo and 911 Carrera, for a story in Road & Track. While on the Swiss side, with method in my madness, I convinced Joe that the town of Meiringen was worth a visit. 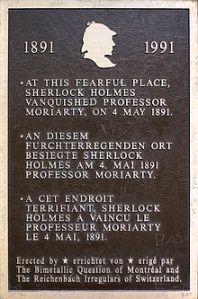 Here’s the reason I conned Joe into a side trip. Photo by Juhanson.

In “The Final Problem,” it was at Reichenbach Fall near Meiringen that Holmes had his fight to the death with Professor James Moriarty. Everyone—even Watson for a long time—thought that Holmes had perished at the fall along with Moriarty.

Reichenbach Fall, near Meiringen, Switzerland, is known to all Sherlockians. Photo by Audrius Meskauskas.

In the July 1985 issue, R&T ran a photo of me, wearing my deerstalker, with Reichenbach Fall in the background. We got plenty of letters about the Porsches, but nary one about this historic setting.

Years later, my Tech Tidbits column in the magazine called for an illustration suggesting the detective work of automotive emissions measurement.

From a Tech Tidbits column in R&T, our detective examines automotive emissions. Illustration by Leo Bestgen.

Of course, Holmes provided the perfect image, and Leo Bestgen gave us yet another Sherlockian reference. Leo, rest his soul, was kind enough to give me the original.

As a last example, the May 1953 issue of Bluebook magazine combined Holmes with automobiles in a most graphic manner. Along with this cover, my collection contains the story “Sherlock Holmes—Dead or Alive?,” by Will Oursler.

It’s said that cover blurbs and images sell magazines. I’ll bet this one did fine.

Alas, my clipping lacks another article hyped on the cover: “Sports Cars Aren’t for Sissies!” ds

This entry was posted on September 8, 2012 by simanaitissays in The Game is Afoot and tagged car magazines, Leo Bestgen, Meiringen Switzerland, Reichenbach Fall, Sherlock Holmes.