THE LAKES of northern Italy, Como, Maggiore, Orta and Garda, are among my favorite places in the world. On Lago Maggiore about 50 miles northwest of Milan lies Isola dei Pescatori, Fishermen’s Island. And at its southeastern tip is Albergo Verbano. This is an inn that I discovered some two decades ago, though Baedeker beat me by almost a century.

I love old guidebooks, particularly those published prior to 1920. Among the most beautiful—and useful—are the Baedeker’s series. The 1913 Baedeker’s Northern Italy is a fascinating means of exploring the region—something worth citing back then is all the more noteworthy today. 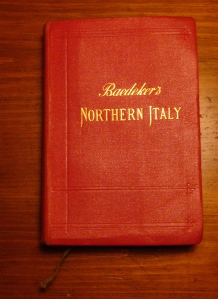 This Baedeker guidebook to northern Italy is as entertaining (and useful) today as it was back in 1913.

And so it is with Lago Maggiore, which, according to my guidebook, was the Lacus Verbanus (Big Lake) of the Romans. Of Maggiore’s Borromean Islands, Baedeker says the scenery “rivals that of the Lake of Como in grandeur and perhaps surpasses it in loveliness.” It describes the Ristorante del Verbano on Isola dei Pescatori as “plain but good.”

A 1913 perspective, loveliness surpassing Como and “plain but good” food.

Over the years it has evidently improved. My favorite room on the second floor of Albergo Verbano has a balcony facing southeast toward Isola Bella.

A room with a view: Isola Bella is appropriately named.

I recall the restaurant’s northern Italian cuisine, served on the terrace with this same view, was great. The risotto con filetti di pesce was creamy with just the right al dente bite to its Arborio rice.

For modern details, check out www.hotelverbano.it.  Click on “The Rooms/the hotel rooms,” and the first photo is “my” room with a view. ds