THIS SECOND iteration of Toyota’s popular RAV4 transformed into an electric vehicle could well be called the Toyota/Tesla. When this joint venture was announced back in 2010, I had to wonder what Toyota’s scads of talented engineers could possibly learn from these Silicon Valley upstarts. The answer: evidently more than little, because this new RAV4 EV is well executed indeed with several unique features that set it apart from other non-Tesla EVs on the market. 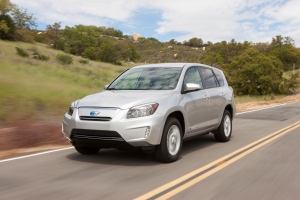 Toyota RAV4 EV’s styling differs, albeit only subtly, from that of its conventional sibling.

First, of course, it’s an SUV, translating into more cargo space and utility than with a sedan of comparable size.

Second, its liquid-cooled battery pack is large, with a Standard energy capacity of 35 kWh (for comparison, the Nissan Leaf’s is 24 kWh). Also, befitting Tesla tinkering (and the expectation that owners will share this proclivity), the battery pack can be set to Extended charge with capacity enlarged to 41.8 kWh. EPA range estimates—which I’ve found to be pretty conservative—are 92 miles in Standard charge; 113 miles in Extended.

The tradeoff, note, is perhaps less battery durability in extending this State of Charge window. Either way, Toyota offers the usual 8-year/100,000 mile warranty for the pack.

A third RAV4 EV tinkering element involves its heat/air conditioning (either one, a real killer of EV range). There are three settings, Normal, Eco Lo and Eco Hi. Normal aims for maximum comfort level. Eco Lo reduces blower speed and other system power consumption. By doing so, compared to Normal it enhances range by 14 percent when cooling and 18 percent when heating. Opt for Eco Hi, and the range payoffs are 34 percent when cooling and 40 percent when heating. You, of course, will be hotter or colder, respectively; but at least it’s your choice.

A fourth aspect setting the RAV4 EV apart is availability of a 240-volt/40-amp Leviton Level 2 Charging Station capable of delivering a charge rate of 9.6 kW. (Lesser EVs charge at 3.3 or 6.6). This setup can do a full recharge of the RAV4 EV’s big battery pack in 5-6 hours. Price for the Leviton Level 2 starts around $1600. 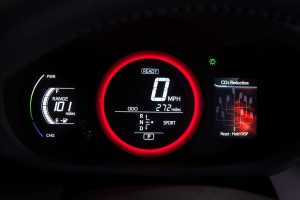 The RAV4 EV has the usual Normal/Sport choice for its road-going performance. Toyota claims 0-60 in 8.6 seconds in Normal; 7.0 in Sport.

As with any of its breed, I found that the RAV4 EV’s instant torque translates into exemplary behavior from here to across the intersection (where the real game is played). Its 115 kW (154 hp) directed to the front wheels gives it adequate performance once past there as well. Also, the RAV4 EV’s regenerative braking, returning as much as 24 percent of retardation energy, is seamless in operation. 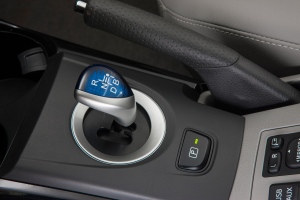 SUVs, of course, aren’t known for their agility on tarmac. However, the RAV4 EV’s battery placement is low, beneath the passenger compartment. This makes for a car-like center of gravity that helps matters. It’s not my Miata; but it’s not my neighbor’s ‘Burb either.

The RAV4 EV’s exterior profits from enhancements of efficiency, including a restyled grille, reconfigured underbody and redesigned rear spoiler. Its 0.30 coefficient of drag is the best among SUVs (a standard RAV4’s is 0.35). 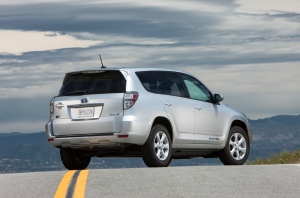 At the moment, the RAV4 EV is available in several metropolitan areas, but only in California (this helping to satisfy that state’s Zero Emissions Vehicle Mandate, Phase 3). Only tiny numbers are projected: 2600 through 2014. Availability may extend to New York City and Boston (reflecting these states’ quasi-California regs).

Manufacturer Suggested Retail Price is $49,800, from which Californians subtract a $2500 rebate (state funds willing) and another $7500 the following year off their federal income tax. No lease plans were in place when I drove the car in early August. And a RAV4 EV carries as standard equipment just about every nicety possible in RAV4-hood.

I’m reminded of the original RAV4 EV of about a decade ago. It met an earlier California ZEV mandate and briefly was on sale for around $30,000. It’s said now that each of these cost Toyota more like $120K to produce. Some 450 remain cult vehicles today.

I’d expect no less from this new RAV4 EV.  ds

This entry was posted on August 21, 2012 by simanaitissays in Driving it Today and tagged electric car, RAV4 EV, Tesla, Toyota, transportation.