THE PRODUCTION OF opera is a split-second business. As part of a recent streaming of the Metropolitan Opera’s Turandot performed January 30, 2016, host Renée Fleming interviews two of the production’s stage managers, Raymond Menard and Terry Ganley. She says they’re “like the generals behind the scenes.” 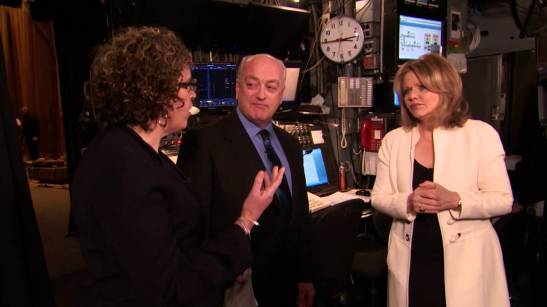 Early on in Met streamings, viewers see one of the managers clicking on a complex bank of controls and intoning, “Maestro to the pit; maestro to the pit.” This is only the first of incredible details handled by stage managers .

Stage Managers’ Responsibilities. The Met’s Franco Zeffirelli-designed production of Turandot is a perfect example of why it’s called Grand Opera.

The finale of Turandot. Image from wqxr.org.

Raymond Menard and Terry Ganley are two of four stage managers splitting responsibilities in this especially elaborate production. Menard is No. 1 Stage Manager that day; “I ‘call the show,’ ” he says, cueing the curtain, cueing the lights, managing the scenery changes. Ganley says, “I rally the troops. I call everybody to the stage, I check all the props.”

“Curtain Go!” commands Menard. Later in Act I Scene 1: “You have your kids, right?” says Ganley, then calmly “Turandot, please, A level,” followed by “Okay, have a good one.”

Later, Ganley says, “Ladies and gentlemen, chorus and extra chorus stage left… Where is everybody?… Very nice.” Again, calmly and under control.

Much of Menard’s commands are unintelligible to all but the most technical: “Bridge two to ten frosted three,” he says. Fleming asks for a translation: Menard says, “That refers to a Follow Spot Two. Follow Spots are key lights that light an individual or specific piece of action on stage.”

Bridge Spot Two would be up above the stage itself. The numbers indicate the color and intensity; the “frosted” is a special filter.

These backstage communications, guided by second-by-second performance manuals, continue intensely throughout the two hours and 21 minutes of the Turandot run time.

Professionals like Menard and Ganley control what could otherwise be chaos of operatic production. What happens when the inevitable chaos creeps in?

A Missed Swan. In the Wagner opera Lohengrin, the heldentenor lead is transported onto and off the stage in a boat pulled by swans. 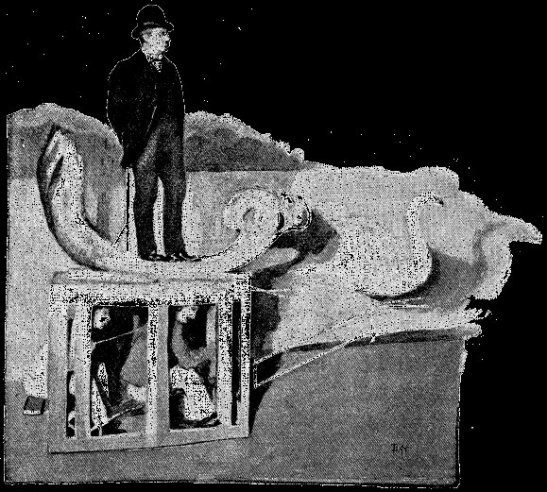 This is a model of what Wagner envisioned as a swan boat. For details, see Behind the Scenes of an Opera-House, by Gustav Kobbé, 1888.

As described in “Opera Chaos, Act II” here at SimanaitisSays, “… at a Metropolitan Opera production in 1936, Lauritz Melchior sang his grand last note at the end of the opera. The swan boat arrived on cue amid orchestral richness—but pulled out before Melchior had a chance to get onboard.

Melchior faced the audience and said, “Wann geht der nächste Schwann?” (“When is the next swan?”)

Tomorrow in Part 2, there’s a missing diva and another soprano who cuts it wonderfully close. ds