THE TERM “ART FILM” means different things to different people, but what I have in mind here is Art Deco in movies of the 1920s and 1930s. My primary source for this is Donald Albrecht’s Designing Dreams: Modern Architecture in the Movies, together with my usual Internet sleuthing. Tidbits follow in Parts 1 and 2 today and tomorrow. 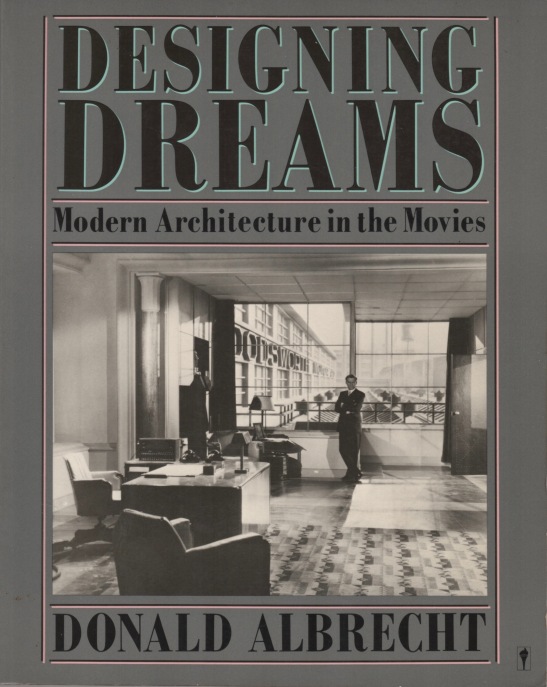 by Donald Albrecht, Harper & Row, The Museum of Modern Art, 1986. The cover image is from the film Dodsworth, 1936. Art Director: Richard Day.

The book notes, “As well as the great stars of the cinema of the 1920s and 1930s—the Garbos, the Gables, the King Kongs—filmgoers recall most vividly and fondly these movies’ beautiful decor: astonishing nightclubs that provided the setting for Astaire and Rogers numbers, luxurious penthouses where languid vamps lay in wait for their suitors, splendid skyscrapers that epitomized the glamour of urban life.”

Also cited: “… pioneering works of architects like Frank Lloyd Wright, Mies van der Rohe, and Le Corbusier became accessible to the public through the perfectly suited medium of the movies.”

Maybe this is one reason that Art Deco resonates with me these days.

A Precursor. Even before the 1925 Paris exposition, French films were showing influence of this new stylistic genre. The 1924 sci-fi drama L’Inhumaine, The Inhuman Woman, combined talents of experimentalists in decorative arts, architecture, and music. 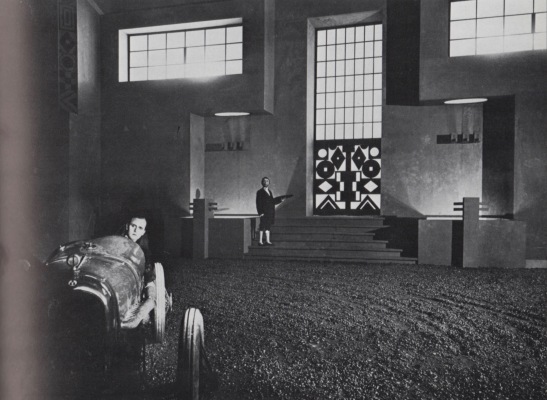 The plot: Young Swedish scientist (and evident car enthusiast) Einar Norsen courts French singer Claire Lescot. At first, she spurns him. He dies. She realizes her love for him, and finds ta da! that Einar feigned his death scientifically. But wait, there’s more. 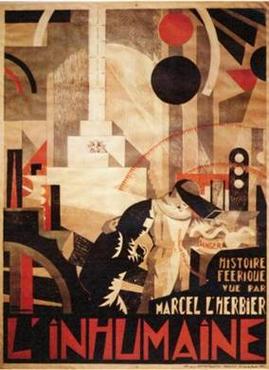 Einar charms Claire with other scientific feats allowing her to watch audience reactions around the world to her broadcasted singing. Evil maharaja and fellow suitor Djorah de Nopur is enraged and poisons Claire. Einar’s science restores her to life. Fin.

Making the Apple Big. The 1929 film Broadway was Universal’s first talking picture with Technicolor sequences. Cinematographer Hal Mohr designed a “Broadway camera crane” that could travel at 600 ft./minute with a 40-ft. arm. 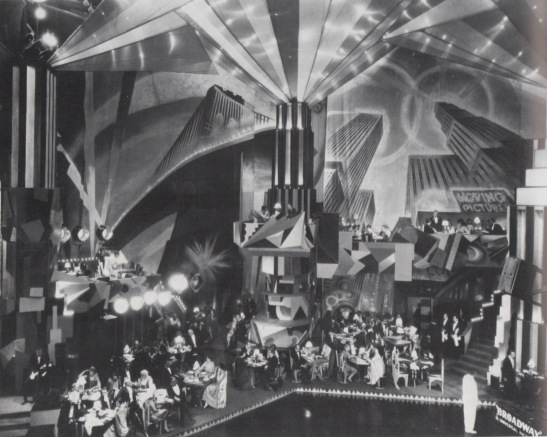 In Designing Dreams, Donald Albrecht wrote, “From the opening shots, in which the viewer travels along the canyons of Times Square and glides into the Paradise Club, Mohr’s mobile camera is the perfect guide to explore Hall’s vertiginous Art Deco space filled with merrymakers perched on balconies.” 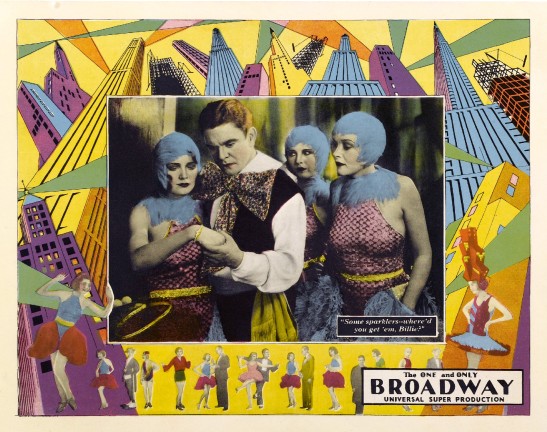 The film Broadway has plenty of pirated bootleg liquor, kidnapping, killings, outre costuming, and Art Deco. But, alas, none of the scientific wonder of L’Inhumaine.