IN THE FIRST years of the twentieth century, Fauve and Naive painting were bridges between impressionism and abstract modernism. Fauvists were the “wild beasts.” At least one Fauvist called a Naive artist “a dope.” Picasso called the same Naive guy “a genius.” It was an interesting time indeed in the world of art.

Here are tidbits and examples collected from The Fauve Landscape, the catalog of an exhibition mounted by the Los Angeles County Museum of Art in 1990, together with my usual Internet sleuthing. 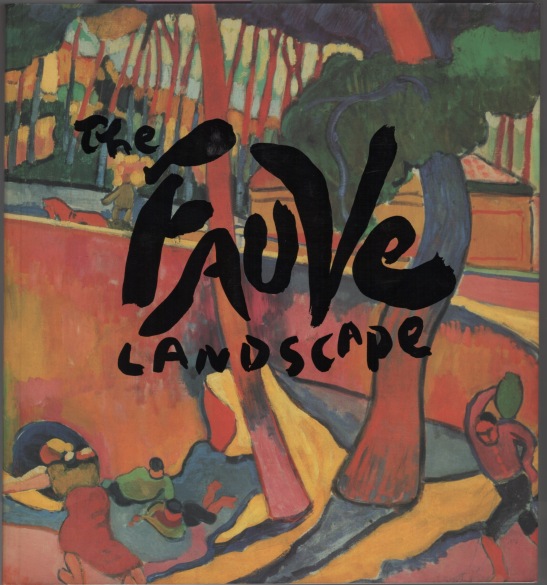 The LACMA exhibition had the full title The Fauve Landscape: Matisse, Derain, Braque, and Their Circle, 1904–1908. After Los Angeles in 1990, it was at the Metropolitan Museum of Art in New York City and, in reduced form, at the Royal Academy of Arts in London in 1991.

L’Estaque, Route Tournante, 1906, André Derain. Oil on canvas. 51 x 76 1/4 in. The Museum of Fine Arts, Houston. This and following image from The Fauve Landscape.

But Ephemeral. The Fauve movement lasted only five years with three exhibitions. By 1908, Fauvists, among them Henri Matisse, André Derain, and Georges Braque, were moving on. Wikipedia cites influences of Paul Cézanne’s and Paul Gauguin’s Post-Impressionism and, particularly with Braque, of Pablo Picasso’s Cubism.

Wikipedia also notes that a Neo-Fauvism movement arose briefly in the mid-1920s as a challenge to Surrealism. Its artists, Wikipedia says, “were later mostly forgotten.”

Fortunately, though, the Fauvists were not forgotten. Tomorrow in Part 2, we’ll visit the South of France in the early 20th century. The sun will be strong, and so will be the opinions. ds