RESEARCHING OLD MANUSCRIPTS is anything but musty and mundane. Palaeographer Christopher de Hamel is a Fellow of Corpus Christi College, Cambridge, and former Fellow Librarian at the university’s Parker Library. He is also the author of Meetings with Remarkable Manuscripts: Twelve Journeys into the Medieval World,

Penguin Press, 2017. This book has been celebrated thrice here at SimanaitisSays, most recently in “Hengwrt Pinkhurst Tidbits” about Chaucer’s The Canterbury Tales.

Today and tomorrow, in Parts 1 and 2, tidbits about the De Hamel book’s first manuscript, The Gospels of Saint Augustine, range from Britain’s conversion to Christianity in 597, to the Archbishop of Canterbury’s appropriation of the manuscript during the reign of Elizabeth I, and on to Pope Benedict XVI’s veneration of the manuscript in Westminster Abbey in September 2010.

The Right Pope at the Right Time. As discussed in Wikipedia, Pope Gregory I “is known for instigating the first recorded large-scale mission from Rome, the Gregorian Mission, to convert the then-pagan Anglo-Saxons in England to Christianity. Gregory is also well known for his writings, which were more prolific than those of any of his predecessors as Pope.”

Gregory the Great, c. 540–604, Bishop of Rome, reigned as Pope Gregory I from 590 until his death in 604. He is associated, possibly apocryphally, with the liturgical plainsong known as Gregorian Chant. (By the way, the Gregorian Calendar came a millennium later, with Gregory XIII.)

During the years 410 to 596, the Roman Empire gradually dissolved through invasion and internal disintegration. Gregory was, in a sense, the right pope at the right time to expand Christianity’s influence. He chose a Benedictine monk named Augustine to convert a far-flung region of the Roman Empire.

Indeed, it was Gregory, so legend has it, who said about the English, “Non Angli, sed Angeli,” (“Not Angles, but Angels”).

The monk, who was to become the first Archbishop of Canterbury, traveled with a book that came to be called The Gospels of Saint Augustine. This manuscript resides today as MS 286 in the Parker Library of Corpus Christi College, Cambridge, England.

Christopher de Hamel notes that it is “the earliest surviving book known to have been in medieval England.” What’s more, de Hamel says, “this is a text that can only have emanated from the household of Saint Gregory himself in Rome.”

The Gospels of Saint Augustine, MS 286 of the Parker Library, Corpus Christi College, Cambridge. A 20th-century rebinding with oak boards and goatskin spine; 8 1/2 in. by 10 1/2 in., 3 in. thick. This and the following image from Meeting with Remarkable Manuscripts.

A Manuscript to Enlighten. The four gospels of Matthew, Mark, Luke, and John are presented in two-column format, with first lines longer than the rest of the passage. It’s what palaeographers call per cola et commata, loosely “by clauses and pauses.” “Each unit,” De Hamel says, “is probably what a person would read and speak aloud in a single breath…. which comes from a time of oral culture when most of the audience for the Scriptures was illiterate.” 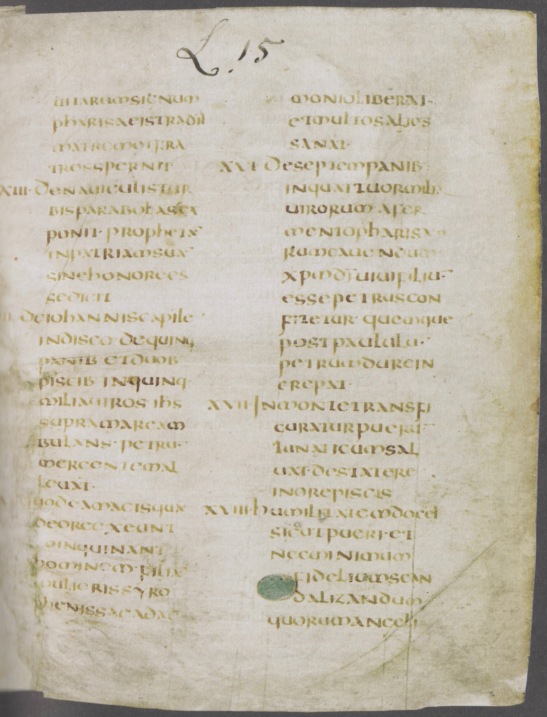 Note the “by clauses and pauses” layout. The “L.15” is a later Parker Library shelfmark.

Cola et commata is timeless, though. “Winston Churchill,” De Hamel adds, “typed his great speeches like this, so they could be read at a glance and his famous oratorical pauses were graphically preordained in the layout of the script.”

Singing Parchment. De Hamel once accompanied MS 286 to Canterbury Cathedral. The procession there began with the rousing Welsh hymn “Immortal, Invisible God, Only Wise.” He describes, “Upwards of 2500 people singing a familiar hymn very loudly in an enclosed stone building makes the air vibrate. This is the nature of sound waves. The parchment leaves of the manuscript… extremely fine and of tissue thinness… hummed and fluttered in time with the music. At that moment it was as if the sixth-century manuscript on its cushion had come to life and was taking part in the service.”

No doubt, Saints Gregory and Augustine would have approved.

Tomorrow in Part 2, The Gospels of Saint Augustine manuscript survives Elizabethan times to be venerated some 450 years later by a modern Archbishop of Canterbury and Pope Benedict XVI. ds

This entry was posted on April 9, 2020 by simanaitissays in I Usta be an Editor Y'Know and tagged "Meetings with Remarkable Manuscripts: Twelve Journeys into the Medieval World" Christopher De Hamel, "The Gospels of Saint Augustine" Parker Library Corpus Christi College Cambridge, Gregory I sent Augustine to convert England 597, Gregory the Great: Pope Gregory I.