ICELAND—LAND OF OPERA, SCULPTURE, AND STREET FOOD AT 1 A.M.

ARMCHAIR TRAVEL IS a blessing these days. And, for me, old travel books provide the vehicle. Cook’s Traveller’s Handbook to Norway, Sweden, Denmark, Finland, Iceland,

1936, is a fine example of this, with time travel tossed in for good measure.

Iceland has appeared several times here at SimanaitisSays: twice for its aluminum production (greater than the U.S.’s); once for its patronymic names (I’d be Dennis Algertsson); and once in association with Worcester Poly, my undergraduate school.

I’ve visited Iceland as well, back in 2006. I admired its extreme energy consciousness, its colorful cleanliness, and that its capital Reykjavik had an excellent bookstore within sight of Gamla Bió, its opera house.

Here are tidbits gleaned from the 1936 Cook’s, my travel, and my usual Internet sleuthing.

Gamla Bió and Harpa. The Gamla Bió (Old Cinema) was built ten years before my Cook’s was published. The cinema’s Danish entrepreneur Peter Petersen liked the place so much that he included an apartment for himself on the top floor.

In 1980, the building ceased being a cinema and became the home of the Icelandic Opera. These days, the Gamla Bió is used for concerts and conferences. Petersen’s apartment is now a rooftop terrace bar, Petersen Svitan (“Petersen Sweat”). 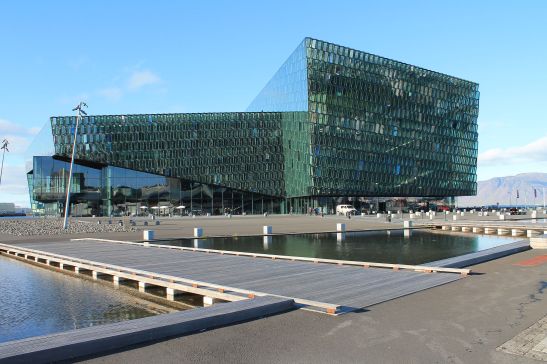 The Harpa, on Reykjavik’s harbor, was begun in 2007, with a hiatus for the world’s financial crisis, being completed in 2011. In 2013, the building won the European Mies van der Rohe Award for Contemporary Architecture.

Reykjavik, 1936. Cook’s made no mention of opera, though it cites “Features of particular interest to the visitor are the National Library, National Museum of Antiquities, National History Museum, and, above all perhaps, the Einar Jónsson Sculpture Gallery, in which are represented all the works of the Icelandic sculptor, Einar Jónsson (b. 1874) and in which the artist himself has his apartment.” Just like Peter Petersen. 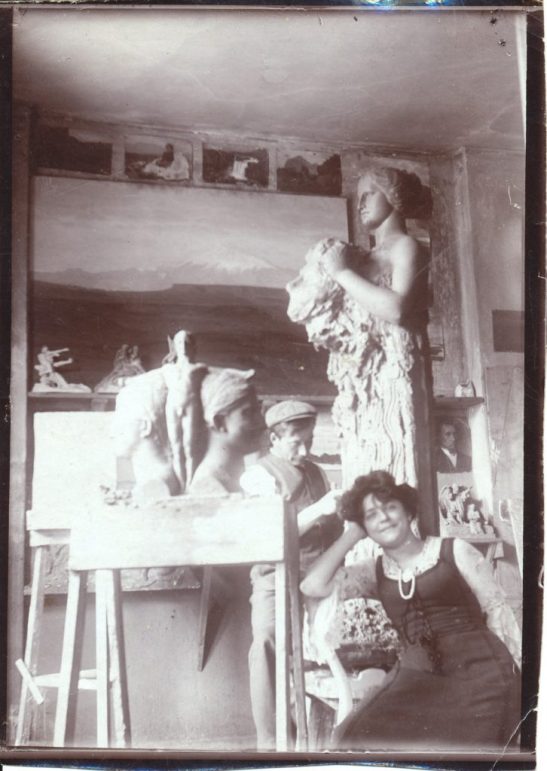 Einar and wife Anna Jónsson in his gallery. Image from icelandictimes.com.

“Since 1921,” Cook’s said, “the entire town has been lighted by electricity produced by an hydraulic power-station some four miles outside its boundaries. The water supply is excellent, and in certain quarters of the town the buildings are heated by water from hot springs, plans being afoot for the heating of the whole town by this means.”

Plans for heating (and deicing sidewalks of) Reykjavik came to fruition long before my visit in 2006. Here, I inspect the gentle warmth of a conduit sending hot water to town.

“The older part of the town is mainly built of wood,” Cook’s wrote, “and though the buildings are largely roofed with corrugated iron, they are made attractive to the eye by being painted in bright colours.” Today, Reykjavik has lots of steel and glass, brightly lit and providing contrast during the country’s extended winter darkness.

Cook’s explained, “The Midnight Sun is not visible in Iceland, which lies entirely south of the Arctic Circle. In Reykjavik the sun goes down at about 11 p.m. at the summer solstice and remains invisible for three hours, though the brightness of the horizon during the period clearly indicates its presence.”

Yes, I remember enjoying sausage-roll street food at the Reykjavik harbor around 1 a.m. Good traveling, that. And a good armchair return now. ds

One comment on “ICELAND—LAND OF OPERA, SCULPTURE, AND STREET FOOD AT 1 A.M.”