RALLY ’ROUND THE FLAG PART 1

THE RALLY ’ROUND the Flag Effect is a political-science concept not exactly evident today. As detailed in Wikipedia, the concept describes an “increased short-run popular support of the President of the United States during periods of international crisis.”

Political scientist John Mueller coined the term in 1970, in his paper “Presidential Popularity from Truman to Johnson.” With regard to Trump and the world’s COVID-19 crisis, I am reminded of Chief Old Lodge Skin’s comment to Little Big Man: “Well, sometimes the magic works; sometimes it doesn’t.”

The effect, though, got Wife Dottie and me talking about flags, their protocol, and various practices. Here, in Parts 1 and 2 today and tomorrow, are tidbits gleaned from Internet sleuthing.

Burning the Flag as a protest has varying implications around the world. In 1989, the U.S. Supreme Court ruled that First Amendment considerations of “symbolic speech” prohibit laws against flag burning. There have been several proposed amendments to permit such a law, but none has received necessary Congressional approval.

Canada has no laws prohibiting flag burning, with such acts of protest protected by the Canadian Charter of Rights and Freedoms.

The Canadian flag, the “Maple Leaf.”

In Denmark, it’s okay to burn the national Dannebrog, but illegal to burn the flag of another country. The distinction? The latter comes under foreign relations, not Danish freedom of expression.

The Danish flag, the Dannebrog.

By contrast, Saudi Arabia’s flag bears the shahada, the Islamic declaration of faith.

Saudi Arabian flag. Its script reads “There is no god but Allah; Muhammad is the Messenger of Allah.”

Anything considered desecration is not only against Saudi law, but also blasphemous to Islam, another serious Saudi infraction. In 1994, for example, McDonald’s had FIFA World Cup carry-out bags bearing flags of participating nations; Coca-Cola did the same with its cans. “Because of Saudi Arabian objections,” Wikipedia notes, “the companies stopped producing these items. Also during the FIFA World Cup in 2002, Saudi Arabian officials protested against printing the flag on a soccer ball on the belief that kicking the creed with the foot was unacceptable.” 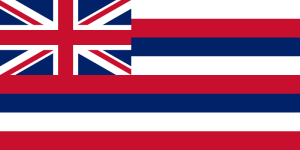 Here’s the Hawaiian flag, right-side-up. It was designed at the request of King Kamehameha I in 1845. Its eight stripes represent the eight major islands; the Union Jack honors Hawaii’s friendship with the British.

This time around, Hawaiians are protesting installation of the TMT, Thirty Meter Telescope, on Mauna Kea, a mountain on the island of Hawaii considered sacred. 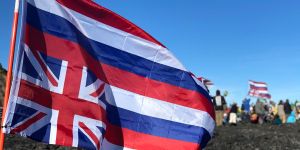 The people of Austria, Belgium, Costa Rica, Denmark, and scads of other countries haven’t this option of protest. Their national flags are symmetrical.

The flag of Austria.

Tomorrow in Part 2, for a variety of reasons we’ll wave the white flag. ds