ON BEING FOOTLESS AND INQUISITIVE

I GET SO MUCH more than book learning from the London Review of Books. Consider this opening line of a Katherine Rundell article: “A common swift, in its lifetime, flies about two million kilometres; enough to fly to the moon and back twice over, and then once more to the moon.”

Of course, I was delighted to continue reading Rundell’s “Consider the Swift,” London Review of Books, August 15, 2019. Here are tidbits from this article, together with my usual Internet sleuthing.

Flyers Extraordinaire. Rundell writes, “Weighing less than a hen’s egg, with wings like a scythe and a tail like a fork, they eat and sleep on the wing….. They mate in brief mid-sky collisions, the only birds in the world to do so, and to wash they hunt down clouds and fly through gentle rain, slowly, wings outstretched.” 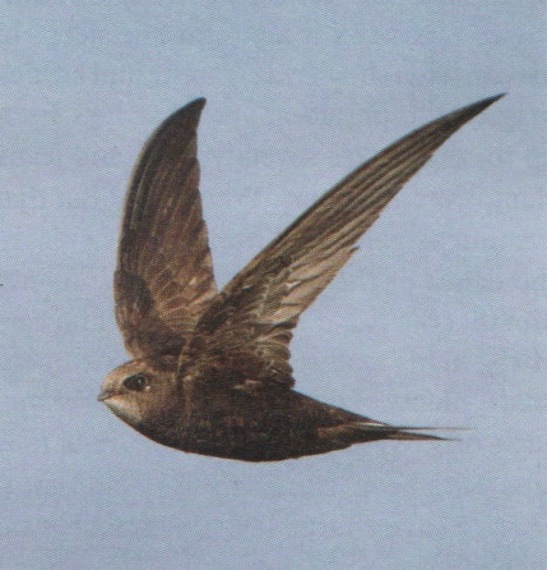 Rundell tells how a swift does this: Its unihemispheric sleep keeps half its brain awake to maintain alertness. “The left side closes first,” Rundell says, “then the right, so that it sways a little in the air as it sleeps.”

A World War I Pilot Knew Them Too. Rundell offers a charming story about a French WWI pilot on night reconnaissance who encountered “a ghostly cloud of them, apparently hovering entirely still in the air.”

The Swift Family Name. Rundell notes, “The swift is of the family Apodidae, from the Greek ápous, ‘footless,’ because they were once believed to have no legs.” Hummingbirds belong to the same Order, Apodiformes, for the same reason. 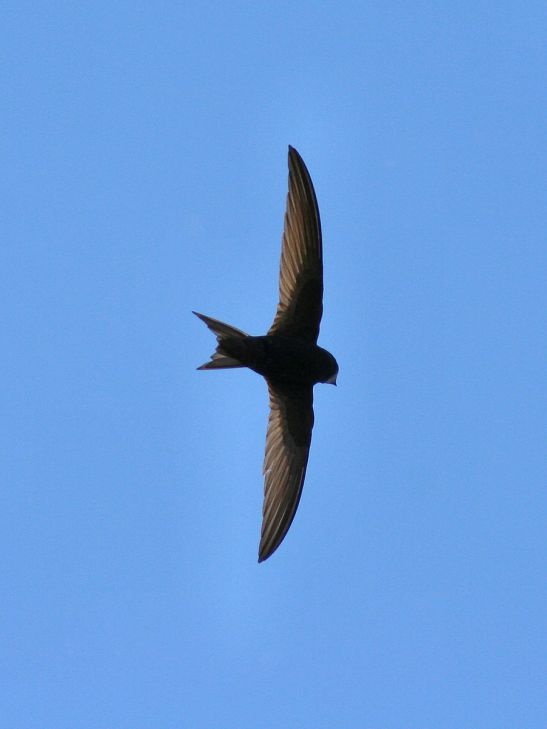 A common swift, anything but common. Image by Paweł Kuźniar.

Swifts and Tyrannosauri. The “footless” variety separated from other birds about seventy million years ago. Swifts are old enough, Rundell says, “to have had a nodding acquaintance with Tyrannosaurus.”

“No sociable windowsill singers,” says Rundell, “no Disney-Princess-finger-perchers, they fly wild, and they fly like a stroke of luck incarnate.”

Heraldic Swifts. They also fly in heraldry: The swift inspired the martlet, a stylized bird without feet. 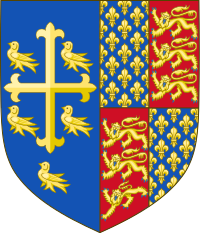 Arms of England’s King Richard II: On the left, “Azure a cross flory and five martlets Or.”

“Unable to land,” Rundell writes, “the martlet is a symbol of restlessness and pursuit: of the constant search for knowledge and adventure and learning.”

I would put a flock of martlets on the cover of just about any London Review of Books. ds

This entry was posted on January 15, 2020 by simanaitissays in Sci-Tech and tagged "Consider the Swift" Katherine Rundell "London Review of Books", swift in Canterbury Tales: "slepen al the nyght with open ye", swift Latin name Apodidae ("legless") (hummingbirds too), swift: heraldry's martlet, swifts coexisted with dinosaurs, the swift does everything on the fly.