WE’RE SEEING a Golden Age in the sharing of data through pictures. Here are tidbits of this, gleaned from here and there with my usual Internet sleuthing.

Thank René. In 1637, French mathematician and philosopher René Descartes, 1596–1650, published representation of two-dimensional data in what has come to be called the Cartesian Plane. His graphing ordered pairs (x,y) was a whole lot more exemplary than simply listing scads of the data numerically.

Graph of the sine curve, y = sin x. Image from The University of Georgia.

Bar Graphs, Pie Charts. Different lengths are excellent means of comparing values of data: the longer the bar, the larger the associated value.

If relative size of parts is important, a pie chart has its slices proportional to the values. A segmented bar accomplishes the same thing.

Area as a Measure. Data comparisons can be displayed through relative areas: the bigger the blob, the greater its associated value. Examples of this appeared here at SimanaitisSays: “The Power of Graphics” and “On the Manifesto Project’s Right and Left.”

Adjacent graphics serve as a table of contents, of sorts, identifying island attractions, everything from algae, apples, and calamari, to swans, taro, and udon.

Animated Bar Graphs. To show data that change over time, graphics can be animated. YouTube is an excellent medium for sharing. 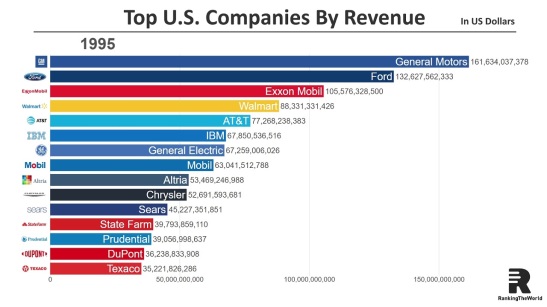 It’s fascinating to watch companies rise and fall, and much more entertaining than poring over years of corporate annual reports. Another interesting example is the Most Populous Cities in the World. Imagine the work underlying this 2-minute 12-second graphic!

Others of this genre include Most Popular Music Styles 1910–2019. This one, assembled by the specialist Data is Beautiful, is based on worldwide recording data. In 1910, Opera topped the listing. Disco had a meteoric rise in the 1970s and a sputtery fall through the 1980s. Today, Hip-Hop, Techno, and R&B fight it out.

Another animated timeline from Data is Beautiful tracks the Best Selling Music Artists 1969-2019. It’s good fun to watch Justin Bieber’s fight for the meh-middle and several stars confirming the adage of “death being a fine career move.” ds

This entry was posted on December 30, 2019 by simanaitissays in Sci-Tech and tagged animated bar graphs, area as indicator of relative importance, color as an identifier in graphics, pie chart: proportion of total, Rene Descartes: Cartesian plane.