WHAT WITH CHRISTMAS only four days away, I have just completed my annual reading of Dickens’ A Christmas Carol, in the annotated edition, of course.

Celebrating Christmas. Hearn notes, “Because the early church fathers feared it came too close to the Roman festival of Saturnalia (a seven-day feast celebrating the New Year), December 25 had to wait until the second century to be proclaimed a holy day. Not until the fourth century was the birth of Christ celebrated as a public feast.”

By the early 1800s, Christmas was a significant national holiday in England. Dickens celebrated it in several of his books, including The Pickwick Papers.

“Christmas Eve at Mr. Wardle’s” by Phiz, The Pickwick Papers, 1836. Phiz, by the way, was pen name of illustrator Hablot Knight Brown, 1815–1882. This and illustrations following are from The Annotated Christmas Carol.

A Carol. Hearn says a carol is “A song or ballad of joy celebrating the birth of Christ. Dickens wrote at least one Christmas carol in verse—the one sung in The Pickwick Papers (Chapter 28); it was later set to the tune of ‘Old King Cole’ and published in an edition of The British Book of Song.”

Dead as a Door-nail. “Old Marley was dead as a door-nail,” Dickens wrote. 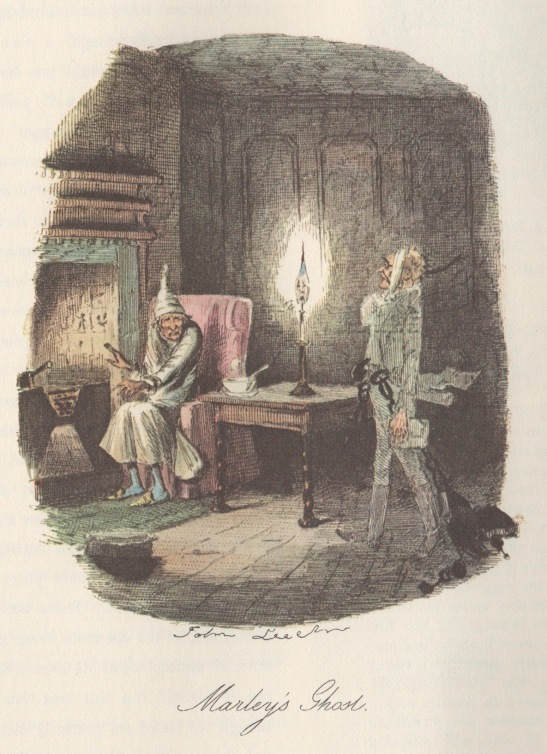 This and the following illustrations are by John Leech.

Hearn adds, “This common simile is generally credited to William Layland (c. 1332–1400) who included it in his The Vision of Piers Ploughman (1362) as ‘ded as a dore-nayle,’ but it seems to have an earlier date. F.H. Ahn … identified it as appearing in an ancient British ballad ‘St. George for England.’ ”

The Last of the Spirits. Culmination of Scrooge’s conversion comes when the last spirit shows him his tombstone, as illustrated solemnly by John Leech.

The Last Spirit, no caption.

Whenever I see this illustration, I can’t help but recall “Death comes to the Dinner” in Monty Python’s The Meaning of Life.

Wife Dottie and I have had the good company of English friends at not dissimilar dinners, albeit sans Death and Salmon Mousse.

Joe Miller’s Cameo Appearance. Delighted in ordering a prize turkey, Scrooge says, “I’ll send it to Bob Cratchit’s! He shan’t know who sends it. It’s twice the size of Tiny Tim. Joe Miller never made such a joke as sending it to Bob’s will be!”

Hearn notes Joe Miller was “A popular but illiterate comic actor (1684–1738)” and that “almost any stray joke was attributed to this apparently humorless actor.” This is Joe Miller’s second appearance here at SimanaitisSays.

Smoking Bishop. Having reformed, Scrooge says to Cratchit, “I’ll raise your salary, and endeavour to assist your struggling family, and we will discuss your affairs this very afternoon, over a Christmas bowl of smoking bishop, Bob!” 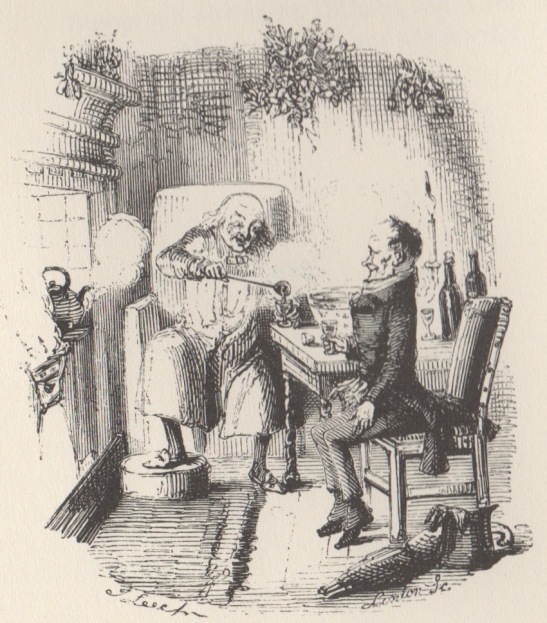 Hearn explains, “This Christmas punch, called by Coldridge ‘spicy bishop, drink divine,’ was a popular tavern drink in the eighteenth century.” A recipe is offered: “… pouring red wine, either hot or cold, upon ripe bitter oranges. The liquor is heated or ‘mulled,’ in a vessel with a long funnel, which could be pushed far down into the fire. Sugar and spices [chiefly cloves, star anise, and cinnamon] are added according to taste. It is sometime called ‘purple wine,’ and received the name ‘Bishop’ from its colour.”

Enjoy your Christmas Bowl too! Merry Christmas! SimanaitisSays will return on December 26, after a brief Holiday Hiatus. ds

This entry was posted on December 21, 2019 by simanaitissays in I Usta be an Editor Y'Know and tagged "Dead as a Door-nail" 1362 (and earlier), "Monty Python's The Meaning of Life" Death comes to dinner "Salmon Mousse", "The Annotated Christmas Carol" Charles Dickens notes by Michael Patrick Hearn, Christmas holiday: not proclaimed in early Christian days, Smoking Bishop: mulled red wine bitter oranges spices.