FUEL CELLS HAVE long exhibited potential for efficient generation of electricity from oxygen in the air and stored hydrogen.

One limiting factor is the FCEV need for a hydrogen refilling infrastructure; we already have the electric one, albeit overextended at times. Another factor is the cost of fuel cells, primarily that of platinum-based catalysts promoting their reduction of oxygen. As cited in “Electrocatalytic Oxygen Reduction Reaction,” “The oxygen reduction reaction is also the most important reaction … in energy converting systems such as fuel cells.”

Pt Preciousness. Platinum, chemical symbol Pt, is a precious metal, its name derived from the Spanish platino, “little silver.” Its application as a catalyst, a promoter of chemical reactions, is important in automotive catalytic converters as well as in fuel cells and other uses.

Wikipedia notes of platinum, “Because of its scarcity in Earth’s crust, only a few hundred tonnes are produced annually, and given its important uses, it is highly valuable and is a major precious metal commodity.”

However, as reported in Science, November 15, 2019, “The expense and scarcity of platinum has driven efforts to improve oxygen-reduction catalysts in proton-exchange membrane fuel cells. Tian et al. synthesized chains of platinum-nickel alloy nanospheres….”

Xinlong Tian is at the People’s Republic of China’s Key Laboratory of Material Chemistry for Energy Conversion and Storage, Huazhong University of Science and Technology; and the State Key Laboratory of Marine Resource Utilization in South China Sea, Hainan University. Ten colleagues perform research at institutions in the PRC, Japan, the Netherlands, and Singapore.

Pt-Ni Geometry. In “Engineering Bunched Pt-Ni Alloy Nanocages for Efficient Oxygen Reduction in Practical Fuel Cells,” Tian and colleagues describe a nearly 100-percent yield of bunched nanospheres formed from platinum and nickel mixtures “that were ultrasonicated and then heated at 180 degree C for several hours.” Then an acid-etching process formed Pt-rich nanocages around the Ni.

This and the following images from Science, November 15, 2019.

As with conventional Pt/C, the point of the nanocage geometry is to maximize Pt exposure for optimal catalysis. 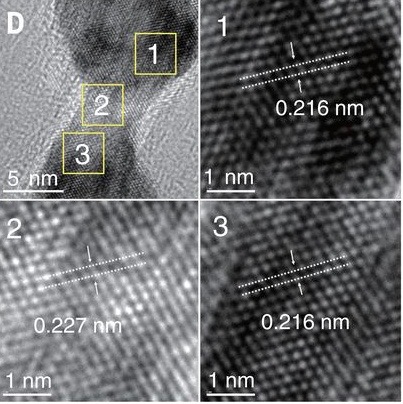 All of this electrochemistry occurs at the nano scale: One nanometer is a billionth of a meter, 10-9 m. A sheet of paper is about 100,000 nm thick.

Samples of the catalyst showed activities that were 16.8 and 14.3 times higher than those of a commercial Pt/C catalyst. The researchers note, “The H2-air fuel cell assembled by this Pt-Ni catalyst achieves a peak power density of 920 mW cm-2 and delivers a current density of 1.5 A cm-2 at a voltage of 0.6 V for at least 180 hours, demonstrating the great potential for practical application.”

“This work,” they conclude, “provides an effective strategy for the rational design of Pt alloy nanostructures and will help guide the future development of catalysts for their practical applications in energy conversion technology and beyond.”