A BUGATTI WITH all-wheel drive? Am I talking about the latter-day Veyron? No. Do I mean the EB110 that I drove back in 1994? No. I mean a real Bugatti carrying the pur sang heritage of le Patron.

The Type 53 was one of the rarest of Bugatti models, with two, perhaps three completed examples. Here are tidbits on the car gleaned from several sources, including Hugh Conway’s Bugatti Magnum; Brooklands Books’ Bugatti Type 10 to Type 251,

and Christie’s Auction Famous Ferraris. Beautiful Bugattis. Magnificent Marques To Be Sold At Monaco, 22 May 1990 At The Loews Hotel.

Jean Bugatti learned of the project, and persuaded his father Ettore to bring Pichetto to Molsheim to design an all-wheel-drive Bugatti. Secret tests of the Type 53 took place around September 1931.

All-Wheel-Drive Tradeoffs. Power wasn’t a problem: The Type 53 had a Type 47 chassis fitted with a Type 50’s 4.9-liter supercharged straight-eight.

The supercharger is a prominent feature (and one of the few non-rectilinear ones) of Bugatti’s 4.9-liter straight-eight. This and images following from Christie’s Beautiful Bugattis May 1990 Monaco catalog.

As noted by Conway in Bugatti Magnum, “The drive from the clutch went rearwards to a separately mounted gearbox, then to the left to drive a shaft to the front and another to a normal type Bugatti rear axle, but with an offset differential casing. There was another transfer casing at the front, with universal joints to the wheels.”

The Type 53’s front suspension was by transverse leaf springs, an oddity for Bugatti. Its front-drive universals were relatively unsophisticated and proved to be a shortcoming.

“Conventional Hooke joints were used,” Conway continued “as, although constant-velocity joints were known at the time, Bugatti and no doubt Cappa and Pichetto seem to have ignored their importance….” 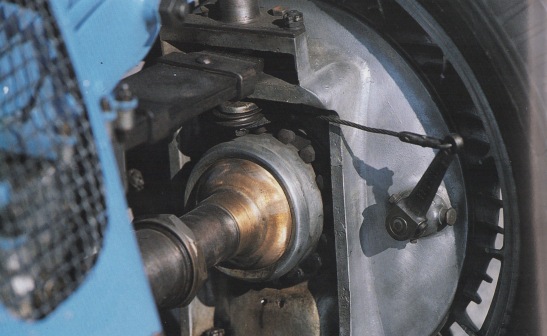 A close up of the Type 53’s front drive.

“Under heavy torque,” Conway explained, “a conventional coupling will produce a pronounced feed-back to the steering at large steering angles, and adhesion will be affected. Drivers of the car spoke of exhaustion after a hill climb!” 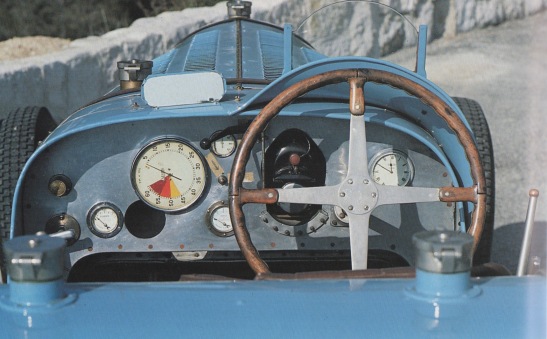 A tough place to earn a living.

A Bear of a Handler. An R&T December 1991 article in the Brooklands book quoted René Dreyfus on the Type 53’s being “impossible to drift; whatever direction you aimed it, that was the direction it went…. a monster of technology, frightening to drive and you needed to be in perfect physical condition.” 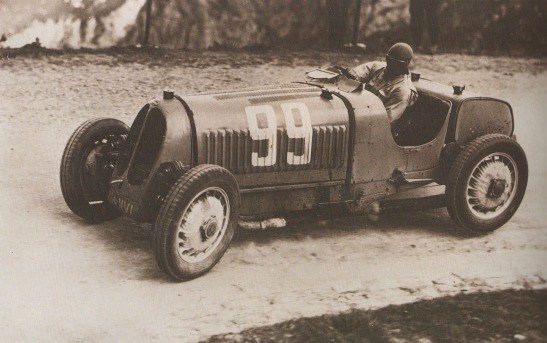 Louis Chiron at “full lock” at the top of the Klausen hillclimb, 1932.

Louis Chiron was apparently up to the task: Soon after the Type 53 was revealed to the public in 1932, he drove it to a record at the La Turbie hillclimb. But later at Monaco, Albert Divo drove the Type 53 for four practice laps and came in exhausted.

Apparently short-duration hillclimbs were to be the Type 53’s forte. Later at the 13.5-mile Mont Ventoux hillclimb, Divo and his Type 53 made second fastest time, a scant nine seconds behind Rudolf Caracciola’s Alfa Romeo. In 1934, Dreyfus made the first ever ascent of La Turbie at more than an average 100 km/h. And, in 1935, Robert Benoist took best-time-of-day at the Chateau-Thierry hillclimb.

Jean Bugatti and the Type 53 at Britain’s Shelsley Walsh hillclimb in 1932. Image from Bugatti Magnum.

As described in R&T, “Jean easily broke the course record on his first run; on the second he broke the car. Allegedly he was waving at an attractive girl on the fast Kennel Bend when he went into an uncontrollable skid, put the tail through the railings on one side of the road and then stuffed the nose hard into the opposite bank.”

According to Christie’s 1990 Monaco auction catalog, “Evidence suggests that this car which was returned to the factory and repaired using the spare chassis frame is the one on offer today.”

I wonder where this brutish yet elegant Bugatti resides today? ds