A portion of my annotated classics collection. 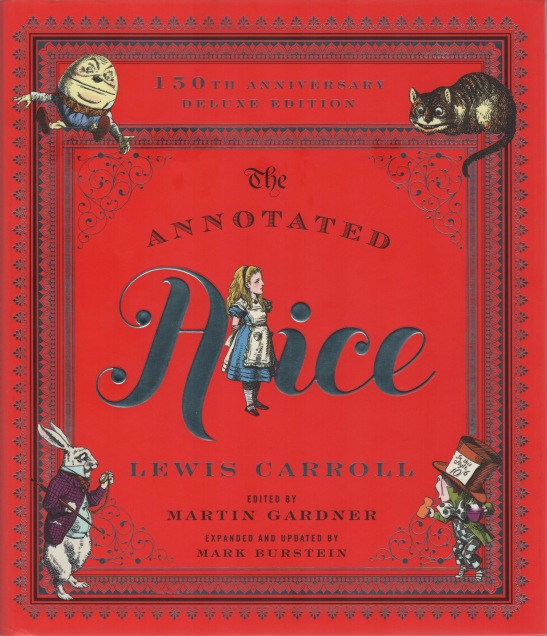 Martin Gardner, 1914–2010, American mathematician, science writer, puzzler extraordinaire, and Lewis Carroll authority, started all this in 1960. Mark Berstein is president emeritus of the Lewis Carroll Society of North America and served as editor of Knight Letter, the society’s magazine.

As Berstein observes, “The Annotated Alice has always been a bit of a palimpsest. At every opportunity when editions were reprinted, Gardner added to or corrected his notes. The book you hold in your hands adds or updates over a hundred annotations that encompass new research or ideas since The Definitive Edition came out in 1999.”

As such, it’s a treasure trove even to those familiar with earlier Alice annotations. Here’s a selection of tidbits gleaned from only the first 22 of the new work’s 364 pages.

Illustrations. The 1865 Alice was illustrated by John Tenniel, 1820–1914. He is remembered as well for being the principal political cartoonist at Punch magazine for more than 50 years. 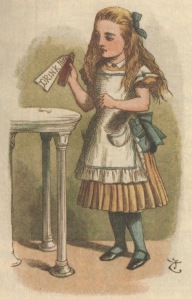 Tenniel’s Alice and White Rabbit. These and other images from 150th Anniversary Edition: The Annotated Alice. 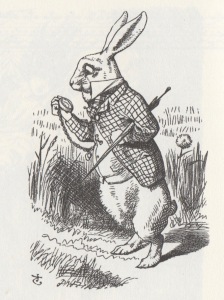 Footnote 1, Chapter 1, “Down the Rabbit Hole,” observes that “Tenniel’s pictures of Alice are not representative of Alice Liddell, who had dark hair cut short with straight bangs across her forehead.” It was for Alice Liddell and her two sisters that Carroll composed the tale as part of picnic adventures on Oxford’s Isis, an alternative name for the River Thames.

A drawing by Charles Copeland, “from an unauthorized edition by Thomas Cromwell of Boston in 1893….”

Alice’s blue and white attire, popularized in the 1951 Disney movie, made its first published appearance in a pirated edition in 1893, not uncommon in those days.

Rabbit Hole Physics. Falling down the rabbit hole, Alice grasps a jar of marmalade from a shelf, one of many furnishings lining the hole. Not wanting to drop it, she chooses to place the jar in a cupboard farther down.

A footnote accompanies this: “Carroll was aware, of course, that in a normal state of free fall Alice could neither drop the jar (it would remain suspended in front of her) nor replace it on a shelf (her speed would be too great).” 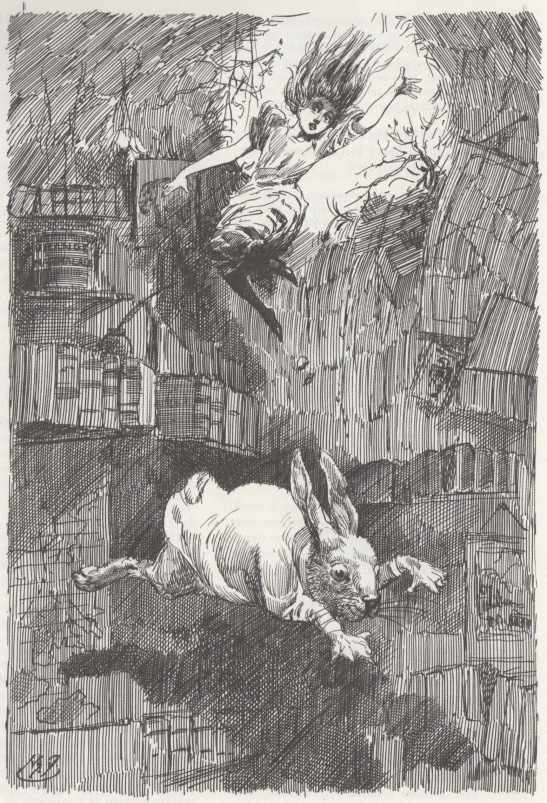 Alice’s and the Rabbit’s descent. Illustration by Harry Furniss, 1908.

Galileo’s Answer. Another footnote amplifies on the physics of falling through a hole that went straight through the center of the earth: “Galileo (Dialogo dei Massimi Sistemi, Giornata Seconda, Florence edition of 1842, Vol. 1, pages 251–52) gave the correct answer: the object would fall with increasing speed but decreasing acceleration until it reached the center of the earth, at which spot its acceleration would be zero.”

“Thereafter,” the footnote continues, “it would slow down in speed, with increasing deceleration, until it reached the opening at the other end. Then it would fall back again. By ignoring air resistance and the coriolis force resulting from the earth’s rotation (unless the hole ran from pole to pole), the object would oscillate back and forth forever.”

“Air resistance of course would eventually bring it to rest at the earth’s center.”

Of another topic entirely: “ ‘Curiouser and curiouser!’ Cried Alice (she was so much surprised, that for a moment she quite forgot how to speak good English).”