YESTERDAY, I SHARED AAAS Science magazine’s reporting on suicide and evolution. Today, global and national aspects of suicide are discussed.

A Global View. “Geography of Loss,” by Meagan Weiland with graphics by Nirja Desai, emphasizes that suicide is a worldwide problem, but a markedly uneven one.

This and the following illustrations from Science, August 23, 2019.

According to the World Health Organization, most countries have been experiencing a decline in suicides. A Science Editorial, for example, describes Denmark’s dramatic decrease from around 38 per 100,000 in 1980 to 11.4/100,000 in 2007, about where it stands today. Science notes that this is among the lowest in high-income countries.

The Editorial continues, “Denmark’s strategy for suicide was multipronged and spanned decades.” Gun control and drug restrictions are part of this. As is Denmark’s tax-based, universal, free health care, with significant psychiatric components including outpatient programs.

The U.S. an Outlier. The suicide rate in the U.S. has been on the rise since the early 2000s. It’s currently around 14/100,000, with marked differences based on gender, urban versus rural, and other criteria. 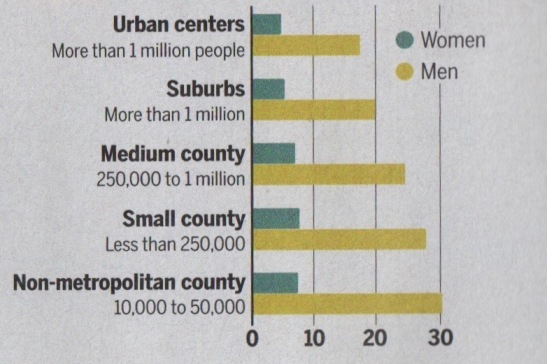 U.S. Data on Gender and Residence.

Men in U.S. rural areas have a suicide rate more than double the national average. As with around the world, men are far more likely to die by suicide than women. 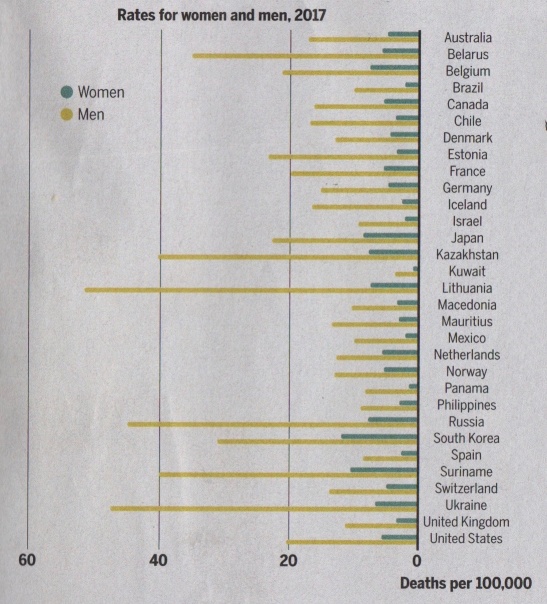 A Selection of Global Data by Gender.

At left, Brady Score; at right, suicide by firearms.

U.S. data on gun suicides versus other gun violence, 2017.

On a related note, in the U.S. suicides by gun are more likely than gun homicides. ds