AUCTIONS OF HIGH-BUCK exotic cars are filled with excitement. How high will the bidding go? Who are the wealthy participants? Who’s on the other end of that incoming telephone bid?

This year’s RM Sotheby’s Monterey Car Week auction of an extremely rare car designed by Ferdinand Porsche promised all this. But then chaos erupted on August 17, 2019.

The First Porsche? Though designed by Ferdinand Porsche in 1938, should the Type 64 be considered the first Porsche? Dr.-Ing. h. c. F. Porsche GmbH dates from 1931, but Dr.-Ing. Porsche established the firm for R&D work (i.e., the Volkswagen and Porsche Tiger tank), not carmaking.

It was after Volkswagen’s 1937 birth, World War II, Dr.-Ing. Porsche’s 20-month post-war imprisonment, and his son Ferry’s establishment of Porsche Konstruktionen GmbH in 1949 that the 356 became the first car built and sold under the name Porsche.

Nevertheless, there’s the stunning Type 64, which made a brief appearance in 2013 at SimanaitisSays in ”Seducing Speed.”

A Fascist Race. In 1938, the Third Reich completed an important new Autobahn through the Austrian Alps and continuing on to Rome, thus linking two Fascist countries of Europe. To celebrate this new highway, a race was planned.

As Rob Sass noted in “ ‘First’ Porsche Heads to Auction, and a Record Price is Expected,” The New York Times, August 11, 2019, “To maximize the propaganda value of the affair—in part marking the Nazis’ 1938 alliance with Italy and the absorption of Austria—the German entry in the 1500-kilometer race would be based on the KdF-Wagen, Hitler’s new people’s car.”

The Berlin-to-Rome race car had a modified KdF-Wagen rear-mounted air-cooled flat-four producing perhaps 40 hp. Its hand-formed aluminum body’s sleekness and lack of any creature comforts such as sound insolation gave this car a top speed of around 90 mph. There were at least two, possibly three, Type 64s built, though as one specialist told Sass, “no two cars were actually ever photographed together.”

The Berlin-to-Rome Type 64, aka Type 60K10, as seen at England’s 2003 Goodwood Festival of Speed. Photo uploaded to English Wikipedia by SamH.

War Intervenes. The Berlin-to-Rome race was never held. According to Wikipedia, in May 1945, American GIs discovered a Type 64 in storage, “cut the roof off and used it for joyriding for a few weeks until the engine gave up and it was scrapped.”

Austrian motorcycle racer Otto Mathé bought the other one and later drove it to victory in the 1950 Alpine Rally. 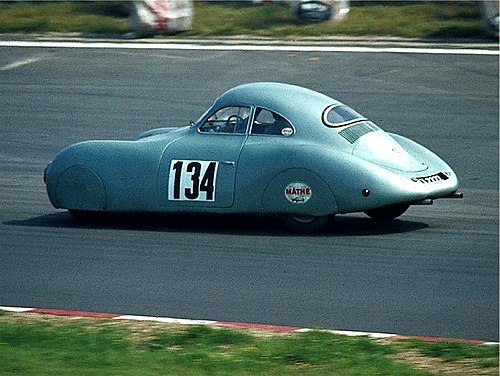 The Type 64 demonstrated by owner Otto Mathé at the Nürburgring in 1981. Photo by Lothar Spurzem.

It is this Type 64 that eventually came to auction by RM Sotherby’s at the most recent Monterey Car Week.

Briefly, the bidding on Lot No. 362 was supposed to start at $13 million. Maybe the English auctioneer was misunderstood, but people heard 30, not 13.

The error was reinforced by a display screen which showed the bid starting at $30 million and moving in increments of $10 million, not the usually $1 million or less.

No matter, because $17 mil was still under the car’s reserve.

The Type 64 non-sale was on August 17, 2019. Its auction excitement still hasn’t settled down. ds

One comment on “CHAOTIC NON-SALE OF DR.-ING. PORSCHE’S TYPE 64”