EVERY 11 YEARS or so, our Sun churns itself into creating a wealth of spots and ejecting immense bursts of energy. These sunspots and solar storms have an effect on us, 93 million miles away, in disrupting satellite operations, GPS systems, financial communications, and even electric utility grids on Earth.

These coronal happenings have been studied since the mid-1700s. In those days, it began as data collection rather than understanding solar phenomena. Today it’s a hot topic (no pun intended) among members of the Solar Cycle 25 Prediction Panel. Science magazine, published weekly by the American Association for the Advancement of Science, ran it as cover story in its May 31, 2019 issue: “The Calm Before the Storms,” by Sarah Scoles, gives details. Here are tidbits gleaned from this article. 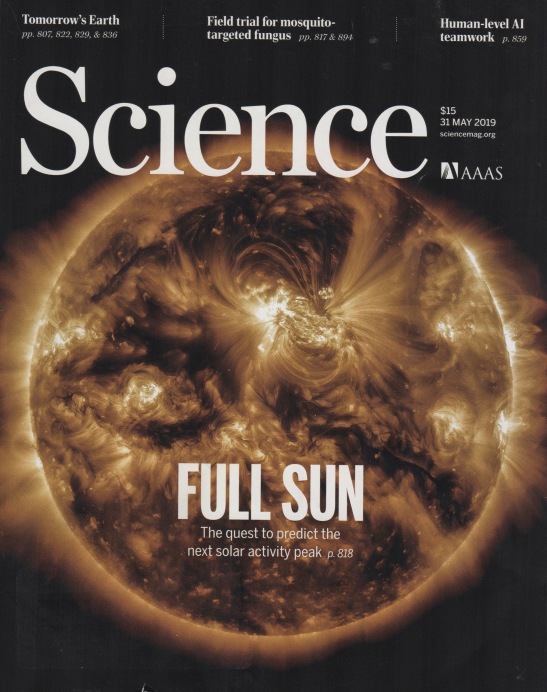 A Cycle Conjectured. In 1848, based on sunspot records, Swiss astronomer Johann Rudolf Wolf identified 1755–1766 as “Cycle 1,” the first period when counts were reliable. Sarah Scoles writes, “He then created a formula for counting the number of daily sunspots—a somewhat subjective technique that has evolved into a counting method used today to marry data sets across the centuries.”

A Capricious Sun. “The cycles are capricious, however,” Scoles notes. “Sometimes the Sun goes quiet for decades, with anemic sunspot counts across several cycles —as occurred during the 19th century’s so-called Dalton minimum.”

Yet, the Carrington Event of 1859 produced a major solar storm: “During that storm,” Scoles writes, “the Sun ejected billions of tons of charged particles, causing aurorae as far south as the Caribbean and generating currents in telegraph lines powerful enough to shock operators.”

Today’s Satellite Operations. During solar minima, the Sun’s ultraviolet radiation dims slightly. This, in turn, causes Earth’s upper atmosphere to cool and shrink, reducing friction for low-flying satellites. “In calm solar cycles, operators assume their satellites will remain in orbit for longer—and because the same goes for space junk, the risk of a collision goes up.”

At solar maxima, the opposite occurs: The Earth’s upper atmosphere heats and inflates. Scoles observes, “Designers need to be sure a satellite has enough propellant to combat the friction of an expanding atmosphere as the Sun approaches maximum, and they need to shield its electronics from solar particles.”

Electronic Hazards. Solar maxima promote the Earth’s own geomagnetic storms. Scoles says such storms “can also induce powerful currents in electric grids, which can destroy transformers and other equipment. Air crews at high altitudes, particularly near the poles, can be showered with the Sun’s energetic particles—a cancer risk.”

Solar Physics. Scoles explains, “Even on its calmest days, the Sun is roiling. Fueled by fusion in its core, the Sun is a ball of hot, charged particles, or plasma, that churns constantly, generating electric currents that in turn induce magnetic fields.”

These currents are complex. On the outer third of the Sun, they rotate at different rates: faster at the equator than the poles. “The shearing motion that results,” Scoles says, “stretch and twist the magnetic fields, strengthening them—a process that somehow affects the 11-year cycle. The tangled field lines sometimes burst through the convective zone and jut out from the surface, forming sunspots.”

Modeling Subtleties. The key words here are “somehow” and “sometimes.” As one scientist noted, “Sunspot is not a physical index of anything. So the fact that we have used it as a proxy in itself kind of presents a problem.”

Research Prospers. Contrasting models have been presented, each with degrees of verisimilitude. Scoles makes a promising observation, though: “Increased computing power and better algorithms mean scientists can run simulations in a few hours that a decade ago would have taken weeks. They also have more measurements to calibrate the models; not just sunspot counts and polar field measurements, but also helioseismology data—measure of vibrations that probe the Sun’s interior—that can capture the flow of plasma beneath the Sun’s surface.”

It seems a grand time to be a solar researcher. ds