AS REPORTED EARLIER this year in USA TODAY, January 9, 2019, “Thieves stole more vehicles in 2017 than they had in any single year since 2009—and the biggest reason might have nothing to do with criminals being cunning.”

It turns out a lot of drivers just left their car keys in an unlocked car. Here are other tidbits on car theft gleaned from Automotive News, the weekly auto industry journal, plus my usual Internet sleuthing. 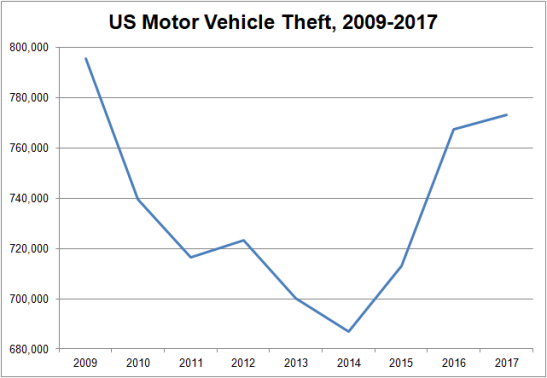 What’s the Risk? According to FBI statistics, vehicle thefts totaled 773,139 in 2017. That year there were around 272,480,000 vehicles on U.S. streets and highways. So, the bright side (assuming hapless owners weren’t hit more than once) is that the vehicle theft rate was only 0.28 percent.

To put this in perspective, according to ScienceDaily, July 28, 2004, ten times this percentage, 2.8 percent, of the U.S. population suffers from excessive sweating, something medical experts call hyperhidrosis. These are the people who give cold, wet handshakes, even when their cars hadn’t just been swiped.

On a more playful note, there’s a 2.1-percent chance of being dealt three of a kind in a five-card hand.

With regard to my car, this comforts me considerably.

Lock It and Pocket It. There are things galore that complicate a car thief’s life. The simplest and least expensive one is to lock your car and pocket your key.

What’s more, Value Penguin cited a Texas law of fining the owner up to $200 for such carelessness and, even more important, the law relieves an insurance company of any coverage responsibility.

Anti-Theft Devices. Modern cars offer standard-equipment theft deterrents of one degree or another, all predicated on the lock-it/pocket-it strategy. There are also gizmos aplenty ranging from mechanisms fixing the controls in place to electronic ignition-defeat or tracking devices. ASecureLife offers a survey of anti-theft devices and tips. Pros and Cons for many of these are also provided.

Succinctly, there’s a psychological game being played. Just how much does the bad guy want your car?

Other Deterrents. An entertaining Kia advertisement offers an interesting strategy.

I won’t give away the point of this Kia Spectra TV spot.

Suburban Auto Group had a different approach: the Trunk Monkey.

My Favorite Anti-Theft Device. The Volkswagen Jetta GLI (as well as several other cars that come to mind) offers a security feature thwarting many car thieves: a manual transmission. Automotive News, May 13, 2019, offers details of the Jetta GLI TV spot:

“Aren’t you going to lock the car,” his friend asks as they walk away.

“No, it’s a stick shift,” the driver says nonchalantly.

Automotive News writes, “Only about 2 percent of vehicles now sold in the U.S. have a manual transmission, Edmunds [an authoritative auto website] said last year. Jalopnik [another] pointed out that the commercial would be nonsensical to viewers in Europe, where stick shifts remain common.”

VW lawyers get the final word, though. Automotive News observes, “A disclaimer in small print notes: ‘Legally we have to tell you that you should always lock your car, so you should lock your car.’ ”

Unless, maybe, you have a Trunk Monkey. ds

3 comments on “THOUGHTS ON AUTO THEFT”