CATS ARE SOCIALLY SMART—BUT ONLY IF THEY CHOOSE TO BE

SCIENTISTS ARE CONFIRMING what cat fanciers have suspected all along: Cats are just as smart as dogs. But I can imagine the cat saying, “As if I care…..”

David Grimm’s article “Ready to Pounce,” in Science, May 10, 2019, describes how “After years of favoring dogs, researchers are finally probing the secrets of the feline mind.” He also notes, “That is, if the cats themselves deign to participate.”

What follows here are tidbits gleaned from Grimm’s article, together with comments from a confessed pal of cats—me.

“Until then,” Grimm notes, “social cognition researchers had paid little attention to dogs, thinking their minds had been ‘corrupted’ by thousands of years of domestication. Hare’s and Miklósi’s finding sparked a canine recognition revolution (Science, August 29, 2009, p. 1062), helping confirm that domesticated animals such as dogs were worthy of study.”

“Researchers,” Grimm observes, “have learned that dogs can recognize emotion in people’s faces, understand components of human speech, and may even have a sense of fairness and ethics.”

Our Husky/Malamute Kenwood, rest his doggy soul, once reacted to our niece saying “Shoo!” by looking at her shoes. However, as for ethics, I tend to believe the animal psychologist who was asked whether dogs feel guilt. “Not for long,” he said.

Cat Subjects Need No Apply. “By 2004,” Grimm writes, “researchers had published more than two dozen papers on canine social recognition—and none on felines.”

Miklösi attempted to change this in 2005 with visits to pet owners’ homes. His paper indicated that cats performed as well as the dogs. However, he noted, some of the feline contingent stopped paying attention. Others simply walked away from the testing site.

Pointing. Point at something, and a human toddler will easily recognize your intent and look in that direction. “Most other animals,” notes Grimm, “including our closest relatives, chimpanzees, fail the experiment. But, about 20 years ago, researchers discovered something surprising: Dogs passed the test with ease. The finding shook the scientific community and led to an explosion of studies into the canine mind.” 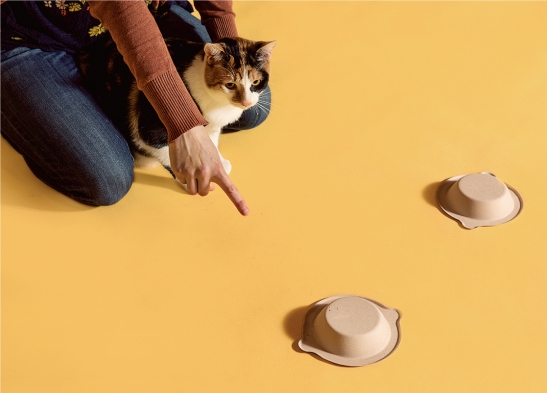 Unlike most other species, cats also get the gist of human pointing. This and the following images from Science, May 10, 2019.

Kristyn Vitale is a postdoc studying the feline mind at Oregon State University Corvallis. She has shown that cats pass the pointing test. In fact, Grimm writes, “… a small but growing number of studies is showing that cats match dogs in many tests of social smarts. The work could transform the widespread image of cats as aloof or untamed.”

Kristyn Vitale and her cat Carl.

Feline Empathy. One aspect studied is how well an animal empathizes with its human. Vitale tested this in a confidence experiment: For example, Clara and her cat Lyla were introduced into a room that has a table fan fitted with crackling streamers.

At first, Lyla was wary and circled Clara. Primed by Vitale, Clara gently said, “What a nice fan. Come and see it.”

Vitale introduces a test subject to the fan experiment.

“Remarkably,” Grimm describes, “Lyla approaches the fan and lies down next to it. ‘She’s picking up on Clara’s positive state of mind,’ Vitale says.”

Grimm notes that similar work was published by Italian researchers in 2015. Cats, like dogs, shape their behavior to human emotions—“something many pet owners may have suspected but that hadn’t been scientifically demonstrated.”

My pal πwacket plays an active role in my research.

“Dogs evolved from the social, cooperative gray wolf,” Grimm explains, “and are the product of thousands of years of intensive breeding and selection by humans. Cats, by contrast, descend from the fiercely antisocial and territorial Near Eastern wildcat and they largely domesticated themselves….”