PIGEONS HAVE made their mark here at SimanaitisSays, in the figurative sense, that is. One pigeon was cited as Nikola Tesla’s close friend: Tesla was quoted as saying, “I loved that pigeon as a man loves a woman and she loved me.” Another appeared in Tom Lehrer’s lilting satiric ballad, “Poisoning Pigeons in the Park.” Yet others were part of a SimanaitisSays quiz concerning the Aeromarine 75 flying boat.

Today, we celebrate pigeons for their exploits described in Jon Day’s “Operation Columba,” a review of Gordon Corera’s book Secret Pigeon Service, in the London Review of Books, April 4, 2019. 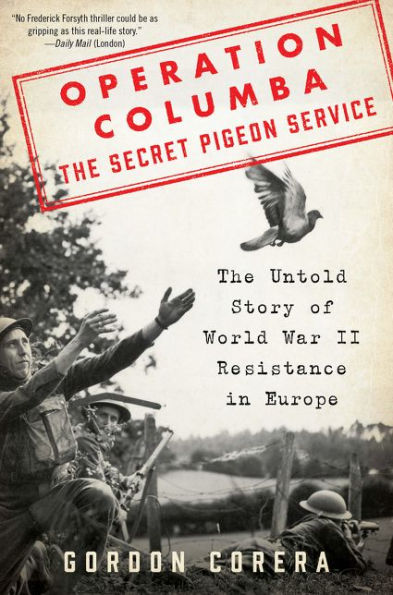 I haven’t read the book yet, but Jon Day’s review is full of tidbits. For instance, “There are 290 species of pigeon in the world, but only one has adapted to life in cities. Feral pigeons are synanthropes: they thrive in human environments where they can skim a living off our excess, nesting in the nooks and crannies of tall buildings that mimic the cliff faces on which their genetic ancestors—Columba livia, the rock dove—once lived.” 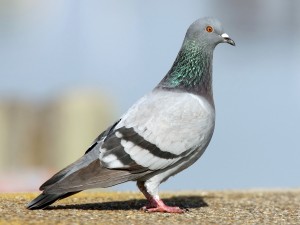 “Pigeons,” LRB author Day notes, “are more intelligent than we give them credit for, one of the few animals—along with the great apes, dolphins and elephants—able to pass the mirror self-recognition test…. Pigeons can recognize video footage of themselves shown with a five-second delay (three-year-old children find it difficult to comprehend a two-second delay).”

The Sumerians first domesticated the pigeon 4000 years ago, homing being the pigeon’s most familiar trait: Once an enclosure or loft has been imprinted on a pigeon, at around six weeks old, the bird will return there for the rest of its life, even after many years away.

They’re also among the swiftest of birds, capable of speeds up to 110 mph. Peregrine falcons can reach 200 mph on downward swoops, but, notes Day, “none can fly horizontally, under its own power, as quickly as a pigeon.”

“Pigeons,” Day writes, “flew across the Roman Empire carrying messages from the margins to the capital. Decimus Brutus broke Marc Antony’s siege of Mutina by sending letters to the consuls via pigeon.”

Established in 1850, Reuters News Agency used a flock of 45 pigeons to bridge a gap in telegraphic communications between Brussels, Belgium, and Aachen, Germany. Also, notes Day, “The five sons of Mayer Amschel Rothschild used pigeons to stay in touch as they travelled around Europe consolidating their father’s banking dynasty.” During World War I, pigeons served as a backup to unreliable radio communication. 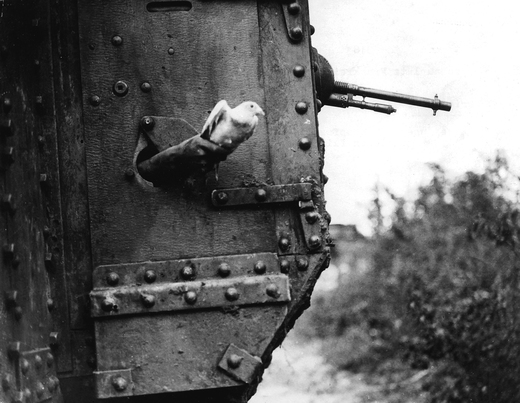 A carrier pigeon being released from a British tank during WWI. Image from London Review of Books, April 4, 2019.

And, in WWII, pigeons were part of intelligence networks of both the Allies and Axis. Corera’s book Secret Pigeon Service is about Operation Columba, which reviewer Day describes as “conceived and run by a raggle-taggle band of secret-service officers, pigeon fanciers, aristocratic animal lovers and soldiers, who didn’t always work well together.”

The MI14(d), the Special Continental Pigeon Service, was a branch of MI16 Military Intelligence. One of its ploys was parachuting pigeons into Nazi-held territory. More than 16,000 of these birds were air-dropped between early 1941 and September 1944. Each bird carried a questionaire seeking information on troop movements, locations of gun or radar arrays, the reach of BBC broadcasts, and respondent’s view of war activities.

Some birds failed to survive the parachuting. Others fell into enemy hands or were consumed by starving locals. “But,” Day observes, “thousands of birds did make it back to their ramshackle lofts in the gardens of suburban semis across Britain.”

“The German army,” Day writes, “even developed a hawking division, led by Hermann Goering, to fly peregrine falcons at pigeons along the coast.”

And the British proposed dropping “second-rate” pigeons wearing fake German identity rings over France, “in the hope,” Day observes, “that they would follow German pigeons into their lofts. If they were chosen for communications, they would then carry their messages back to Britain.”