“PETULANT” WAS the first word that came to mind when I heard Trump’s threat to dump immigrants into U.S. sanctuary cities.

But then etymology furthered my enlightenment. According to Merriam-Webster, the adjective petulant means “1: insolent or rude in speech or behavior. 2: characterized by temporary or capricious ill humor: peevish.”

Which, in turn, led me to M-W’s definition of the adjective peevish. “1. querulous in temperament or mood: FRETFUL. 2: perversely obstinate // a peevish child. 3: marked by ill temper // has a peevish, even spiteful, streak.”

Image from The Atlantic.

There are good arguments that either word applies, but “peevish” really nails it. Among synonyms for this word are perverse, short-tempered, and snarky. Remind you of anyone?

Etymologies. I had mistakenly thought that petulant was etymologically related to petty, but it’s not: Petty traces to the French petit, “little.” Petulant, to the Latin petere, “to go to,” “to attack.”

M-W traces peevish to Middle English pevish, meaning “spiteful.” The word’s first known use is “in the 15th century, in the meaning defined at sense 1.”

The Compact Edition of the Oxford English Dictionary (2 Volume Set)

The Compact Edition of the Oxford English Dictionary provides more information on peevish: “First evidenced in the end of the 14th c., but rare before 1500. Derivation unknown. The exact sense of the adj. in many of the early quotations is difficult to fix.” 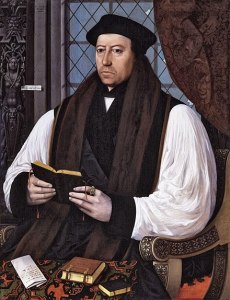 Thomas Cranmer, 1489–1556, English cleric, Archbishop of Canterbury during the reigns of Henry VIII, Edward VI and, for a short time, Mary I.

“The Most Reverend Father in God Thomas Archebyshop of Canterburye” was a leader in the English Reformation. He also helped build the case for annulment of Henry VIII’s first marriage (five more marriages to come).

Image by Jonathan Ernst/Reuters from cnbc.com.

It would be anachronistic to refer to Cranmer as Henry VIII’s consigliere, but you get my drift. ds