NEW HAMPSHIRE’S Mt. Washington is among the most prominent peaks in the U.S. And, as reported in R&T, it’s renowned as a hillclimb venue and notorious for erratic weather as well.

R&T wrote in its November 1956 issue, “Sunday, race day, came up sunny and cool. It stayed that way until all had completed the official runs, though the early starters wound up in the clouds. However, the weather retained its contrariness. Awards were made at the base in driving rain.”

In 1956, the best time for the eight-mile climb was considerably quicker: 10 minutes 21.8 seconds—this new record owing its quickness to the potency of a 4.5-liter Grand Prix Ferrari driven by “a lean six-foot reformed chicken farmer from Dallas.” R&T and we also knew him as Carroll Shelby.

This Ferrari had previously raced in Europe under the 1950–1953 Formula One regulations for 1.5-liter supercharged/4.5-liter naturally aspirated power

“Waiting tensely for the starting signal, Shelby revs the engine of the Grand Prix Ferrari.” Would that magazines had audio! This and the following images from R&T, November 1956. 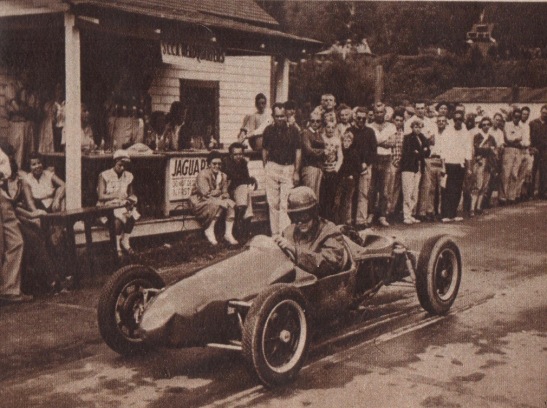 Either way, given Mt. Washington’s average 16-percent grade, Keith’s was an impressive drive. Third place was a fellow named Richard Thompson in a Corvette. 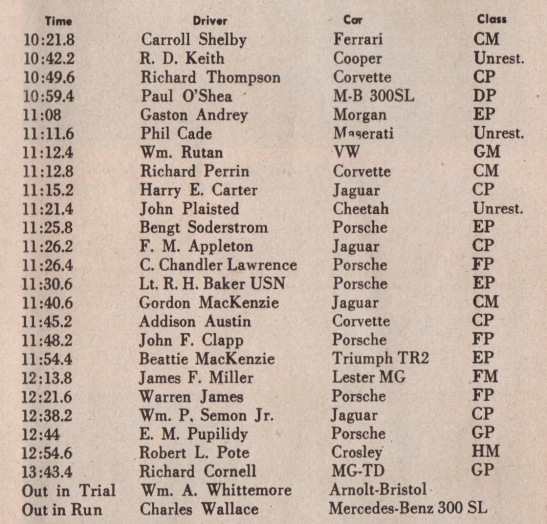 R&T reported, “To the many thousands of spectators who lined the length of the steep tortuous carriage road, it was undoubtedly the most thrilling event to date. There was a 1938 record of 12:17.6 made by Lemuel L. Ladd of Brookline, Mass., in a Ford V-8 Special. No less than 19 drivers in the 1956 competition bettered that mark.” ds